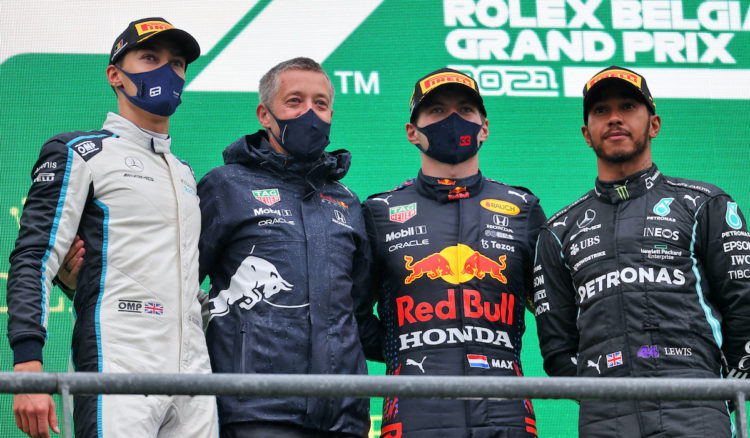 Lewis Hamilton has described George Russell as “incredibly talented” and “the future” as the evidence grows in favour of the Williams driver replacing Valtteri Bottas at Mercedes for 2022.

Russell recently confirmed he was informed of his future prior to the Belgian Grand Prix, whilst Bottas has opened up on what he wants from a new contract, hinting at a multi-year deal and a “fun” environment, with speculation mounting that the Finn will take up the vacant seat at Alfa Romeo, replacing the retiring Kimi Raikkonen.

Meanwhile Hamilton has opened up on what he thinks about Russell, with the seven-time F1 World Champion giving a very complimentary review of his fellow British driver and, possibly, future team-mate.

“I honestly think it would be good,” Hamilton said when asked about Russell joining Mercedes. “George is an incredibly talented driver, clearly.

“I would say probably the only highlight from last week was his qualifying lap, it was amazing. I think he’s humble, I think he’s got a great approach. Naturally being British I would imagine probably helps in terms of communication.

“But at the moment naturally I have to be super supportive of the team-mate I have right now, so that’s why I’m always supportive of Valtteri because we have a job to do right now. Neither of us can win the team championship alone, we have to do it collectively.

“But he’s [Russell] the future, he’s one of the members of the future of the sport. I think he’s already shown incredible driving so far and I’m sure he’s going to continue to grow. So where better to do it than in a great team like this?”

There’s been speculative reports that Hamilton was pushing internally for Bottas to be retained, given he poses little threat, unlike Russell, but Hamilton doesn’t feel he needs to prove himself and would prefer to support new talent coming through.

“It’s not like I haven’t been proved [myself]. I raced against some incredible drivers as team-mates. In my rookie year I was alongside Fernando [Alonso]. I don’t really feel like I have anything to prove.

“You’ve heard me earlier on in the year talk about Lando [Norris], it’s encouraging to see these youngsters come through. They’re fierce. I see a lot of myself in this younger generation. They’re what the sport’s going to be relying on moving forwards.”