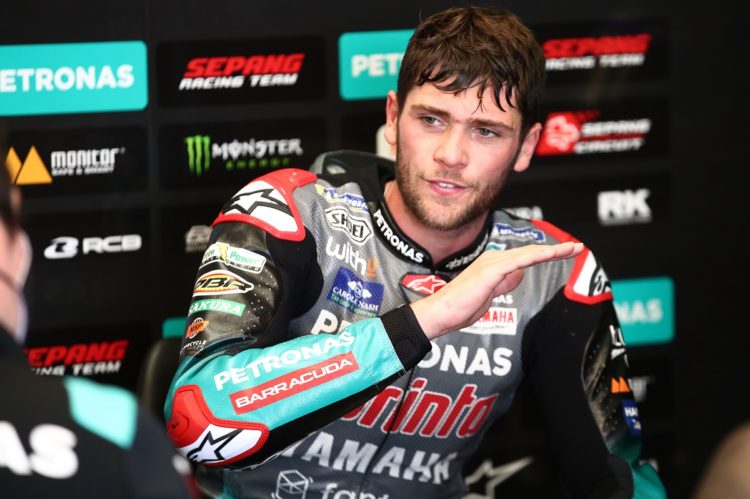 Jake Dixon says he is “really annoyed” after lacking grip throughout the British Grand Prix having reckoned he could run with the rear group of riders after enjoying a strong warm-up.

The Brit-making his premier class debut after Cal Crutchlow switched to the factory Yamaha team to replace the sacked Maverick Vinales at Silverstone- impressed having never set foot on a MotoGP machine prior to first practice on Friday, consistently lowering his gap to the leading riders as he aims to seal a full-time berth in the series for 2022.

Having qualified only 1.9 seconds off pole position on Saturday, Dixon lapped just 1.6 seconds slower than warm-up leader Aleix Espargaro on Sunday morning shortly prior to the race and reckoned he “could have gone with the guys in the back group” at his home event.

This scenario unfortunately failed to materialise as he lacked “the same feeling” he had found towards the latter stages of the weekend, leaving him to cross the line in 19th as the final classified rider-50 seconds adrift of race winner Fabio Quartararo-leaving him “frustrated” and “annoyed” post-race.

“I felt really good throughout the weekend and felt really strong as the event went on, especially in morning warm-up my pace was really good and I felt I could have gone with the guys in the back group but unfortunately in the race I couldn’t find the same feeling,” said Dixon.

“The grip, feeling and everything was different so it was really frustrating and we need to analyse this problem to see exactly why but you can see there was a problem there to cause the difference.

“Overall though it’s been great, we wanted more after this morning for the race and I’m really annoyed because when you feel you have really good pace and have worked all weekend with the team giving you such a fantastic bike it’s not ideal when you have something out of your hands causing problems with the grip.”

With Yamaha Racing Managing Director Lin Jarvis leaving the door open for a possible further outing for the 2018 British Superbike Championship runner-up while speaking on the MotoGP world feed on Sunday morning, Dixon remained coy on his immediate premier class future but felt he had done “a really good job” acclimatising to the M1 after two-and-a-half seasons competing in Moto2.

“It’s too early to tell (about further MotoGP chances) but I’ll keep doing what I can do, I feel I’ve done a really good job this weekend to be two seconds off the top guys in qualifying with few laps, to then understand everything and be 1.6 seconds off in warm-up and a tenth behind Valentino (Rossi) also in warm-up I’ve not done a bad job,” added Dixon.

“The support of the British crowd was incredible, every time I came through the cheering and screaming was fantastic and when the crowd here is packed the atmosphere is sensational and I think everyone was feeling the buzz, it’s an incredible feeling.”