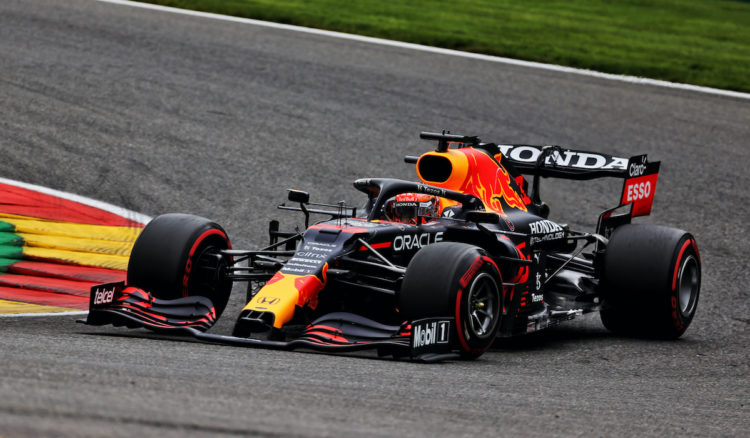 Formula 1 is back after the summer break and that means the resumption of the intense title battle between Mercedes and Red Bull, Lewis Hamilton and Max Verstappen – a battle in which every tenth will count!

F1 heads to fan favourite Spa-Francorchamps, a historic and fascinating track, as well as one of the most complex and selective on the entire F1 calendar in terms of the required set-up given it has a mix of slow, medium and high speed corners as well as long and short straights with huge changes in elevation.

Red Bull has arrived in Belgium with yet another update to its RB16B, which really is quite amazing given just how close we are to 2022 and the point in which teams – the majority of which already have – switch focus to next year entirely. Red Bull’s development has been relentless and it’s very clear they will fight to the very end for what would be their first title success since 2013.

Not only have the team brought various aerodynamic adaptations to suit the Spa track, but there are also more general upgrades with a view to the remainder of the year. During the Thursday of the Spa weekend nothing was leaked about possible updates on their car. Looking more closely at the free practice photos on Friday, we caught a glimpse of a modification to the floor of Max Verstappen’s car in the Z-cut area.

We were able to notice a different shape in that area (above), with the addition of a second flow diverter, as an aid to the old one already present in the old configuration (run by Sergio Perez).

The old diverter also has a more curved shape at the top, in order to better channel the air flow from the front of the floor towards the outside of the car. There is also what appears to be a small blow, just behind the Z-cut.

A technical solution that perhaps falls within micro-aerodynamics, but which certainly, in such a close fight with Lewis Hamilton’s Mercedes, could help make a difference. This is the umpteenth change in the floor area, after the last major upgrade we saw at Silverstone, in the rearmost area (below).

The technical work for Belgium mainly concerned the aerodynamic set-up to tackle Spa’s unique circuit, with an RB16B that continues to offer itself as a single-seater that prefers very little impact on the wings compared to the other cars. The rear wing seen at Baku (and then discarded) with the DRS movable flap cut in the outermost area.

Spa we know to be a track that in recent times tends to favour those who use little wing, to exploit the maximum speeds in sector 1 and 3, sacrificing the mixed sector 2 which is a more technical part of the track. However, in free practice in dry conditions the RB16B looked to be gaining on the W12 in the mixed sector.

The high rake set-up, and the fact of being able to generate a lot of downforce from the floor and the diffuser, allows Red Bull to run less wing without compromising its downforce as much as its rivals. This aspect is one of the strengths of this RB16B that we have been able to appreciate several times this year.

Cooler weather conditions tend to favour the RB16B more than the W12, especially since the new tyre structure was introduced at Silverstone. To try to return to the levels of thermal efficiency that Verstappen’s car had on the tyres, new brake ducts were introduced in Hungary in the front axle, with a design that introduced more air into the rim.

An ear-shaped shape (inset) that incorporates the solution used in 2020, slightly sacrifices aerodynamic efficiency for better management of tyre temperatures.

One might think that it is a solution exclusively linked to the cooling of the brake discs, but in reality it could have been suitably studied to better manage the internal temperatures of the rubber, after Pirelli decided to modify the structure of the tyres during the 2021 championship. The decision to “turn around” and return to a solution similar to 2020 is not trivial.

Staying on the subject of cooling, the low temperatures in Belgium (including the rainy weather) have made it possible to adopt more close aerodynamic solutions at the rear. Compared to Budapest, in Spa it was possible to close the bodywork in the coca-cola area as much as possible, also to increase aerodynamic efficiency in the long straight of the Kemmel and in the bend of Blanchimont. In the comparison below, it is possible to observe the solution adopted at Spa, with the engine cover openings remaining below the suspension, unlike those run in Hungary.

The accident that occurred in FP2 by the Dutch driver certainly upset the plans of the Austrian team, which we remember being at the limit with its power units and with a tight budget cap after the accidents at Silverstone and Budapest.

From this point of view, Red Bull is slightly underprivileged compared to rival Mercedes, and must have some regard if it does not want to incur a penalty on the grid in the event of a new fourth power unit being introduced, despite the fact that there is still half of the season left. As for the budget cap, it is another aspect that Christian Horner’s team must pay particular attention to, as they can no longer afford to spend financial resources to replace damaged parts.

Horner knows that this year they have the chance to bring home a world title that has been missing since 2013, having the chance to end Mercedes’ domination which has now lasted for 7 seasons.

The continuous developments we have seen over the course of the season on the single-seater designed by the genius of Adrian Newey are more surprising when you consider the fact that many teams are now focused on the development of the 2022 car. However, since last season Red Bull has strongly believed in the birth and development of this RB16 version B, having had since last season the strong conviction of being able to give Max Verstappen a car capable of fighting for the world championship.