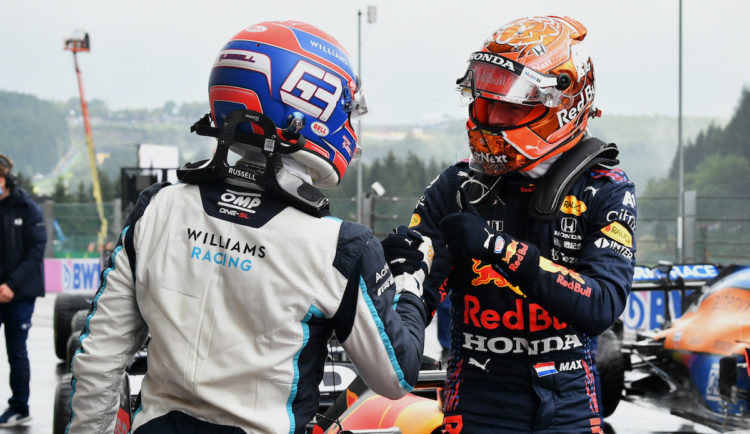 George Russell has vowed to “go for it” on the opening lap of the Belgian Grand Prix following a shock result in qualifying on Saturday.

The Williams driver will start from second place, behind only Red Bull’s Max Verstappen, after shining in wet conditions which saw him briefly on provisional pole before being pipped by the Dutchman on his final run on intermediate tyres.

Russell praised the feeling from his car which gave him the confidence to push to the limit and knew he was on a good lap, but never expected to finish so high up the order.

“I don’t know what to say to be honest,” Russell said. “An amazing feeling. We definitely did not expect to be starting on the front row. We just did everything right and at the right moment in these conditions. So happy for the whole team. We had a fantastic result in Hungary and it feels right our hard work is starting to pay off.

“My engineer was on the radio to me counting down ‘Lewis has just gone behind, then Ricciardo, Gasly’ and I was just like ‘Jeez, what’s going on?’ I knew it was a good lap. It was so tricky out there. I had the luxury of just being able to go for it, putting everything on the line, but it was so difficult.

“I thought we had done a good job to get out of Q1 [after] how we got on yesterday and now we’re standing here on the front row.

“The car was feeling great, I had so much confidence. I was in a fortunate position of there’s nothing to lose. We were in Q3 which is not the norm for us, and we just had to go for it. We saved the full maximum engine mode for the last lap, and we just thought, you know what, let’s go for it and I’m buzzing, absolutely buzzing.”

Turning his attention to Sunday’s race and asked whether he could challenge for the lead given Spa’s long straights, he replied: “That is the plan, if it is there for the taking, we will go for it. Tomorrow is the important one and I’ve got to go out there and score some more points.”

This is Russell’s second front-row start following his sole Mercedes outing last year in Bahrain where he qualified second to team-mate Valtteri Bottas.