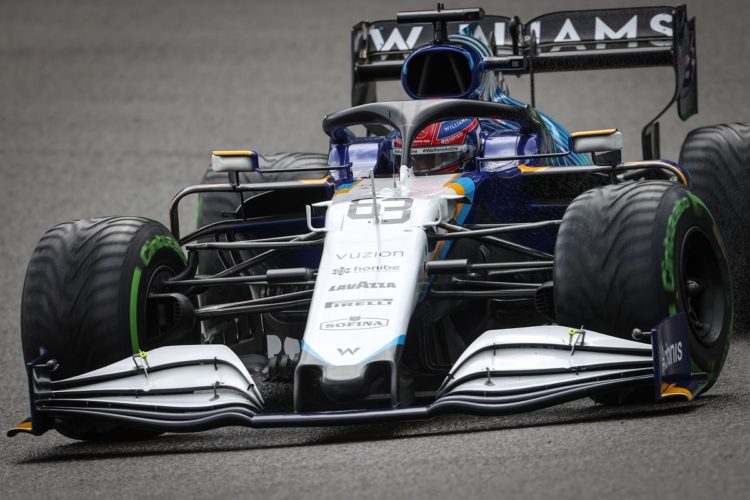 George Russell has set his sights on achieving a top-five result at the Belgian Grand Prix on Sunday after producing a shock drive to second place in qualifying.

The 23-year-old briefly held provisional pole at the end of Q3, before he was displaced by Max Verstappen, who ended the session as the fastest driver.

With rain forecast for Sunday’s race, Russell believes Williams has the pace to finish high up the order, but nevertheless remains realistic over keeping faster cars behind.

“We’ve obviously got to be realistic, we’ve got incredibly fast cars behind us,” Russell said. “But if the conditions stay the same, we’ve got a car that is probably quick enough on merit for the top ten.

“But if we’re starting on the front row there’s no reason why we can’t try and hold that position for the majority of the race.

“I don’t think I’m going to do anything stupid with the cars around me that are clearly going to be faster than us, but I think there’s no reason why we can’t finish – if conditions are like this – top five and just maximize it. Points are an absolute minimum.”

Having completed his final laps on used tyres, Russell revealed that he was expecting to be told over the team radio by his race engineer that he had finished in the lower half of the top ten order.

“Throughout the junior ranks you get the chance to drive this place [Spa-Francorchamps] a lot and more times than not, it’s wet,” Russell said.

“But getting into Q3 was an achievement in itself, and we had no more new inter tyres, so we were actually on a used set of inters for Q3.

“So I was expecting P9, P8 or P7 really, and when my engineer came on the radio telling me all the drivers who were slotting in behind me I thought ‘Crikey, this could be a good one!’

“Then obviously Max just pipped me. We’re in a great position but obviously no points for qualifying so eyes on tomorrow.”