Verstappen sets pace then crashes out of Belgian GP practice 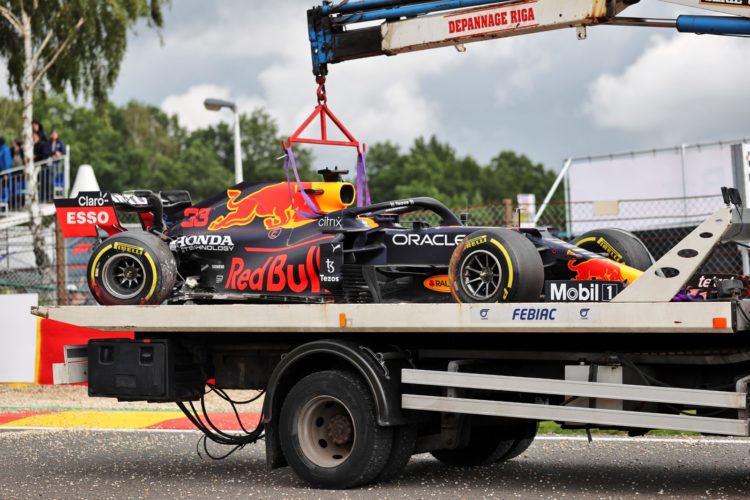 The Red Bull Racing RB16B of Max Verstappen (NLD) is recovered back to the pits on the back of a truck after he crashed in the second practice session. Belgian Grand Prix, Friday 27th August 2021. Spa-Francorchamps, Belgium.

Max Verstappen set the fastest time during second practice for Formula 1’s Belgian Grand Prix before crashing out of the session.

Bottas and Hamilton finished just 0.041s and 0.072s behind respectively but did so on the Medium tyres, having been unable to improve on their Soft runs.

Verstappen brought the session to an early halt a few minutes from the scheduled conclusion after crashing through Malmedy.

Verstappen lost control of the RB16B through the right-hander at the highest point of the track and slid into the barriers, sustaining damage to the rear-right of the car.

Charles Leclerc claimed his maiden grand prix victory in Belgium in 2019 but also suffered a crash during the second practice session.

Leclerc copped an armful of oversteer exiting Les Combes and as he tried to correct the moment slid into the tyre wall entering Malmedy.

The left-front of Leclerc’s Ferrari SF21 sustained terminal damage and his incident brought out the red flags.

Leclerc finished the day down in 18th place, in front of only the Haas drivers Nikita Mazepin and Mick Schumacher.

Alpine claimed a shock victory in Hungary and while a repeat in Belgium is highly unlikely both Fernando Alonso and Esteban Ocon displayed encouraging speed.

At a circuit where the team was relatively strong under its Renault guise in 2020 Alonso was fourth while Hungary winner Ocon placed seventh, avoiding damage after a spin exiting Fagnes.

Pierre Gasly maintained his and AlphaTauri’s strong performance from the opening practice session by classifying fifth, just 0.012s behind Alonso, and within half a second of pacesetter Verstappen.

It was confirmed earlier on Friday that Perez will be staying within Red Bull’s stable in 2022.

Saturday’s final practice for the Belgian Grand Prix is scheduled for 12:00 local time