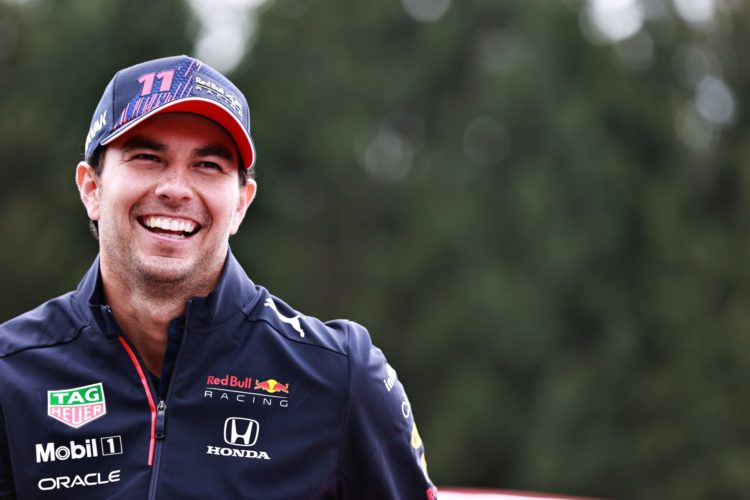 SPA, BELGIUM - AUGUST 26: Sergio Perez of Mexico and Red Bull Racing looks on in the Paddock during previews ahead of the F1 Grand Prix of Belgium at Circuit de Spa-Francorchamps on August 26, 2021 in Spa, Belgium. (Photo by Mark Thompson/Getty Images) // Getty Images / Red Bull Content Pool // SI202108260483 // Usage for editorial use only //

Perez previously competed for Sauber, McLaren and Force India/Racing Point prior to linking up with Red Bull for the 2021 season.

Perez holds fifth spot in the championship and claimed victory at the Azerbaijan Grand Prix, the second of his career.

Red Bull had previously indicated that it was likely to retain Perez for the 2022 season and on Friday confirmed the Mexican’s continued presence within the team.

It ostensibly paves the way for sister team AlphaTauri to retain its current pairing of Pierre Gasly and Yuki Tsunoda.

“Checo is a highly respected team member and his experience and race-craft are invaluable as we fight for the Constructors’ Championship,” said team boss Christian Horner.

“His integration into the wider team has been seamless and we have been impressed by his performances during the first half of the season which demonstrate what he’s capable of in our car.

“Next year we move into a new era of Formula One with completely revised regulations and cars, and with over 200 races and a decade of experience under his belt, Checo will play an integral role in helping the team navigate this transition and maximise the RB18.

“Our current attention is on ending the 2021 season as strongly as possible and we look forward to seeing Checo build on a first successful season with the team.”