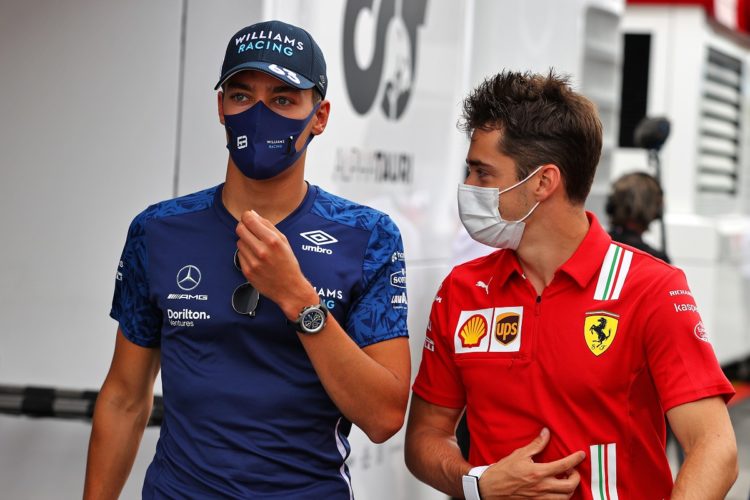 Ferrari’s Charles Leclerc has backed George Russell for the second seat at Mercedes in 2022, stating the Williams driver deserves the drive.

Mercedes is set to place either Russell or Valtteri Bottas alongside Lewis Hamilton next year, when new technical regulations will be introduced.

Russell made his Mercedes debut last year at the Sakhir Grand Prix in place of Hamilton, and was on course for the win before a pit-stop blunder and a slow puncture denied him.

The Briton has been a Mercedes junior driver since 2017, and has been heavily touted for the seat at the Brackley-based team next year, which will be his fourth in F1.

Leclerc, who received a promotion to Ferrari after completing his rookie season with Sauber in 2018, believes Russell’s performances to date at the backmarker Williams outfit justify a move up the grid.

“It’s great if George gets that [Mercedes] seat because he deserves it,” Leclerc said.

“He’s consistently there and showing good things and also in the past I’ve raced with him and I know how strong George is.

“So, he definitely deserves that spot and I think it would be great to have such a talented driver in that seat.”

Max Verstappen, who is currently embroiled in a title fight with Mercedes and Hamilton, also believes Russell warrants a move up the grid.

“For sure George is very quick and he can’t stay where he is forever, I think he deserves more,” Verstappen said.

“At the end of the day it is up to Mercedes to make the call, right, so it’s not really from my side.

“But for sure I rate him as a driver, and he is still very young, so it’s natural that at some point they move up, especially the good drivers.”