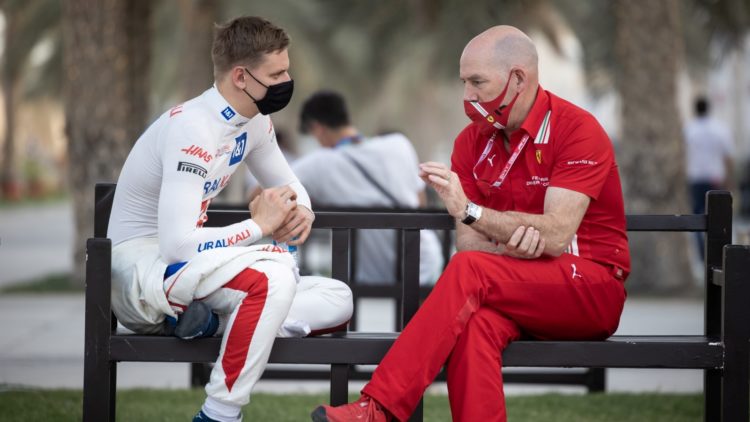 Ferrari Driver Academy coach Jock Clear admits he has been ‘somewhat surprised’ at the progress of Mick Schumacher during his maiden Formula 1 season.

Schumacher signed with the FDA in January 2019 and has worked closely with the Scuderia which included runs in a Ferrari in official F1 tests and at its own test track, Fiorano.

The German’s rise through the junior formulae has not been meteoric in comparison to some of his rivals but has been steady often taking the first season to learn a series before forming a title charge in the following season.

When asked on the official F1 podcast Beyond The Grid if he was pleased with Schumacher’s progress, Clear said: “Somewhat surprised! Obviously, we’ve worked with him for quite a while now at Ferrari in the young driver academy, we worked with him for a while so we know him quite well.

“It’ll be no surprise to him to hear that often that the criticism that was levelled at him in the smaller formulae was he takes quite a while to get up to speed, he’s not someone who was gonna get in it and Bam! Be up to speed.

“But give him a second year in the formula and he really starts to come good and his consistency shows through. I’m quite impressed with his out and out speed this year, to be honest.

“I mean, people said to me at the beginning of the year ‘yeah, but you know, how’s he gonna get on against Mazepin’ and I said well ‘Well, I wouldn’t be surprised if Mazepin starts off out-qualifying him a few times because Mick takes a while to get up to speed’. But actually, not the case.

“Mick’s continued to make good progress in that area. It was an area we’d identified, and it’s an area Mick has addressed and I think that is his best trait at the moment, you tell him something once and he’s on it and he deals with it and you’re like ‘Oh my god, he’s fixed it.’. And that will serve him very well.

Clear previously worked with Mick’s father during their time at Mercedes and has since seen his son carry on his well-renowned work ethic into his own career.

“The apple doesn’t fall far from the tree,” he added. “He is so much like his dad, in his mannerisms and his accent that is quite enjoyable in itself, that reminds me of good days. I quite enjoyed working with Michael and Mick is similarly such a pleasant young man to deal with.

“That’s not a given, a lot of racing drivers are successful and do what they do and ultimately you have to say, he’s paid to drive a racing car fast and that’s what he does.

“In terms of the technical, the driving. I’d say it’s probably too early. The difficulty for me is that I worked with Michael right at the end of his career when he had seven World Championships and I’m working with Mick right at the beginning of his career.

“Admittedly he’s won F3, he’s won F2 and he’s been winning, but he’s sort of arriving now in a situation where he is just desperate to prove himself but is not able to do that in the car he’s got at the moment.”