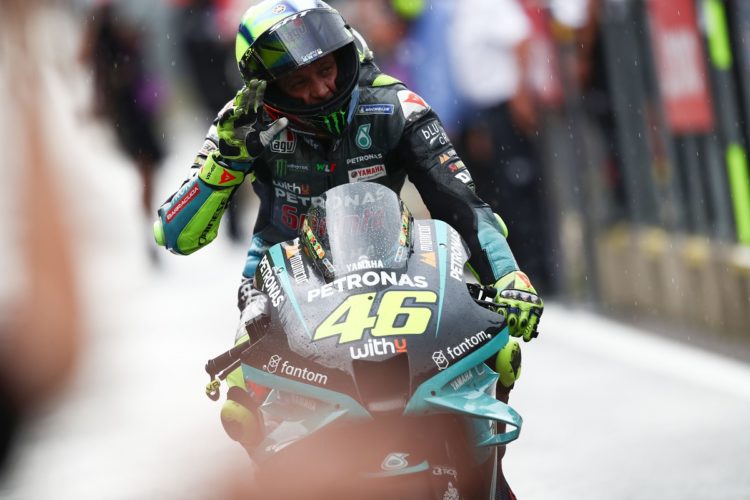 Valentino Rossi rued the late rain that hit in the Austrian Grand Prix, the Italian reckoning he could have scored a rostrum had the rain come “two minutes” later.

Rossi was running well in the battle for tenth prior to inclement weather arriving with only around half-a-dozen laps to go, the Petronas SRT rider electing to stay out on slicks while the bulk of the leaders peeled into the pits to swap to their wet-prepared machines.

He took third from Takaaki Nakagami soon after, though as the rain started to increase in intensity he was passed by Avintia’s Luca Marini as well as Tech 3 KTM’s Iker Lecuona before dropping to his eventual finishing result of eighth as the leading wet runners managed to catch most of the gamblers on the final tour.

Rossi labelled the final few laps as “very exciting”, the seven-time premier class champion revealing “I couldn’t believe it” when realising he was contention for a first rostrum in over a year, though affirmed he was still happy to bag his best result of the year in eighth despite ultimately missing out on a podium.

“Maybe (craziest race ever contested), it was incredible that the switchover point between the wet and slick tyres was in the last three corners,” explained Rossi.

“It was very exciting, I didn’t want to stop because there were only five laps remaining so I thought I’d continue, it was the right choice but if the rain had arrived two minutes later I could have been on the podium.

“When I saw P3 on the board I couldn’t believe it because you can’t see very well your position, overall though it was a positive result for me and the team as we got some good points, so we are happy.

“We needed a good result and today the atmosphere was great because it was the first time we had a full circuit (of fans) and I could see so much support with people wearing yellow, so the in-lap at the end was exciting.

“On paper this track is the worst one (for Yamaha), but we found something more compared to the start of the season and I felt better on the bike.

“I really like Silverstone it’s one of my favourite tracks and usually we are quite strong there so I look forward to it and hopefully we’ll have good weather and a strong weekend.”

Rossi’s half-brother Marini meanwhile revealed shortly after guiding his Ducati to a best ever premier class result of fifth that time spent at his older sibling’s off-road ranch was key to keeping his machine on the straight and narrow un the treacherous conditions.

The six-time Moto2 race winner says the feelings of sliding around in the closing laps of the Austrian GP reminded him of navigating around Rossi’s off-road course on a motocross bike, experience he believes was crucial to bringing home the best finish of his rookie MotoGP campaign so far.

“I waited for the others to stop but then there were only five laps left, so I thought if I followed I’d lose 30 seconds and that I’d have a better chance to try and continue and see where we end up,” said Marini.

“This was the right choice and I’m happy that I was clever and that I could think about it and take the right decision in the critical moment.

“It’s a pity because in the last three corners I was really close to the podium, I tried and gave 100% but on the last lap it was full wet at every corner and it was very tough to ride the bike.

“I had so many feelings similar to the ranch (Rossi’s off-road course) and I could remember the feelings on corner entry with a bike that slides a lot and I tried to use my skills to achieve the best result, so fifth is amazing.”