Mercedes explains why it didn’t pit Hamilton during Hungary restart 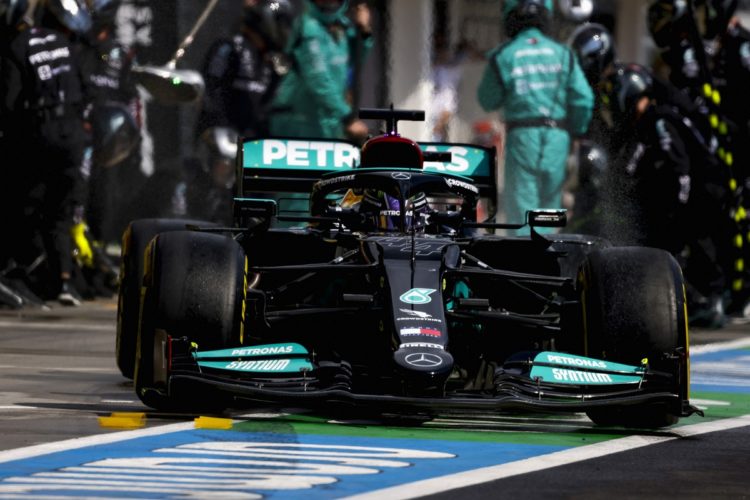 Mercedes has provided an in-depth explanation as to why it didn’t pit Lewis Hamilton for slick tyres during the race restart at the Hungarian Grand Prix.

Hamilton was the only driver on the grid at the end of the formation lap for the standing restart, with all remaining drivers in the race pitting for dry weather tyres after taking the original start on intermediates.

The seven-time world champion pitted on the following lap but dropped to the rear of the field before recovering to third by the chequered flag.

Mercedes Team Principal Toto Wolff expressed to Sky Sports F1 after the grand prix that the team made the right call under the circumstances.

However, Mercedes now admits that it got the call wrong, explaining that making judgements while leading the pack is much more difficult than doing so when you’re behind several cars.

“Clearly in hindsight we made the wrong choice, but you have to bear in mind those decisions are really, really tricky,” said Mercedes Technical Director Mike Elliot in the team’s post-race debrief video.

“We agonised over what tyre to fit at the very start of the race, as it turned out the inter was definitely the right choice because it started raining on the lap to the grid.

“We agonised over what tyre to fit after the red flag and clearly all of the cars fitted inters. And on that lap to the grid, even though all the drivers had fitted inters, clearly others decided to change their mind and we should have too.

“But the reality is, it’s actually more difficult for us as a team than it is for the other teams. When you are the front car, you can’t see what everybody else is doing.

“You are the lead car. When you are further back in the chain, you can see what others have done and you can change your mind accordingly. You can use that new evidence to your advantage.”

Elliot added that had Hamilton come into the pits, Mercedes would’ve been forced to hold him in his box while his competitors drove past, ensuring that he was always going to lose positions.

“The second problem for us is that we have the first pit box in the pit lane,” Elliot said.

“The second problem with that or same problem, but another way of looking at it, is if we had tried to force our way out into the pit lane we could have collided with another car and we actually saw that happen in that sequence of pit stops.”