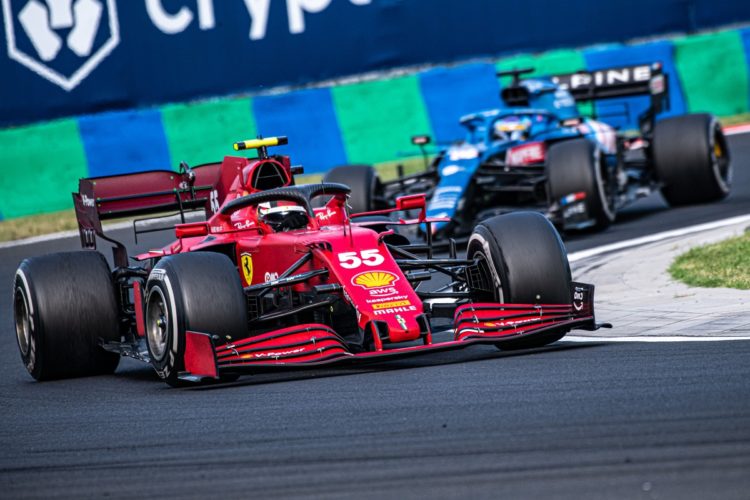 Ferrari’s Carlos Sainz has revealed that he considered giving DRS to Fernando Alonso amid his battle with Lewis Hamilton for fourth place in Budapest.

Towards the end of last Sunday’s Hungarian Grand Prix, the trio ran together, with Alonso and Hamilton fighting closely on several occasions.

Their squabble allowed Sainz to pull away slightly, however Hamilton eventually moved ahead of Alonso, before quickly overtaking Sainz.

Sainz says he considered keeping Alonso within one second behind so his compatriot would have a higher top speed with DRS down the straight, making it more difficult for Hamilton to pass them both.

“Yes, of course I did consider it,” Sainz said when asked if he thought about providing Alonso with DRS. “Obviously we are racers and we are considering every kind of scenario to stay ahead.

“What you guys probably don’t know is that I was having to do a lot of fuel saving. I was also quite weak in the last corner because I was struggling a bit with the tyres towards the end.

“And the combination of having to fuel save into Turn 1 and being weak in the last corner meant that in the end, I took the decision not to risk my position with Fernando.

“We will never know if I took the right choice, but thinking about it at the time, my feeling was to play safe and tried to pull away from Fernando to make sure that I tried to do all the fuel saving and Lewis would take more time to catch me.”

Sainz crossed the line in fourth place, but was later promoted to third after second-placed Sebastian Vettel was disqualified.

It marked Sainz’s second podium of the season – he currently sits sixth in the Drivers’ Championship with 83 points.