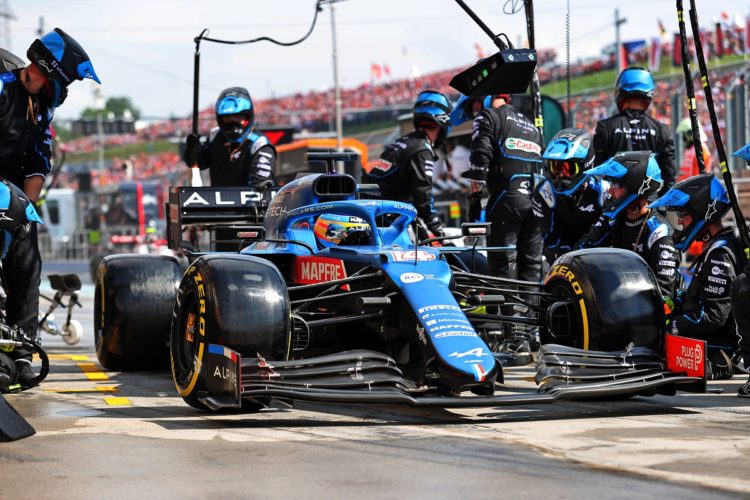 Alpine has revealed that it didn’t begin to focus on winning the Hungarian Grand Prix until Esteban Ocon made a pit stop for Hard tyres on lap 37.

Ocon took his first Formula 1 victory last Sunday, holding off Aston Martin’s Sebastian Vettel for much of the race.

Vettel pitted one lap before Ocon, attempting to undercut him, however Ocon emerged onto the track just ahead of the four-time world champion after making his pit stop, and didn’t relinquish the position in the second half of the grand prix.

“I’m not sure we started to really focus on that side of it [winning] until after the pit stop,” stated Alpine’s Sporting Director Alan Permane.

“The first part of the race was making sure we came out on the second set of tyres in the lead.

“From there, then the win was on and what was really beautiful was when we let him go, when we told him now you have to drive flat out, he pulled out two and half… I don’t know what it was, 2.8 seconds or something on Sebastian.

“It enabled us to just react to Sebastian so we didn’t have to do anything until he pitted, we pitted a lap after him and came out in front of him.”

While navigating through the pit stop phase was important, Permane says that Fernando Alonso’s battle with Lewis Hamilton was “absolutely crucial” for Ocon.

Alonso kept a resurging Hamilton at bay for a number of laps, as the seven-time world champion looked to recover to the front after stopping for fresh tyres on lap 47.

“If you pit first you expose yourself to Safety Cars and all sorts of things, nastiness and that was – there were two key things, that and Fernando with Lewis,” Permane said.

“[It was] undoubtedly crucial. It was 11 laps I believe, if he’d got past him on the first lap like he got past Carlos on the first time past, I’m sure Lewis would have been there.