Schumacher pleased to ‘not crack under pressure’ during battles 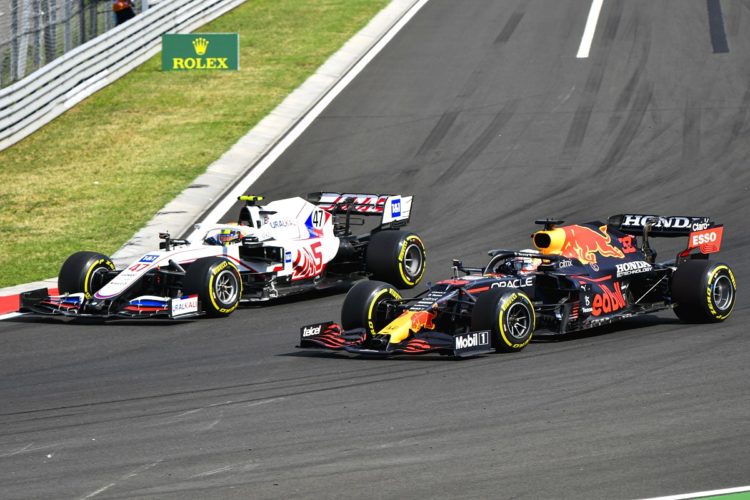 Haas’ Mick Schumacher says he was happy to add to his racing experience in Hungary and not fold under pressure from behind, as he found himself battling a series of cars during the race on Sunday.

With Haas the clear backmarkers in 2021, Schumacher has spent much of his rookie season towards the rear of the field.

However, a chaotic opening sequence to the Hungarian Grand Prix promoted Schumacher up the field, and he soon found himself racing championship contender Max Verstappen.

The two clashed wheels but avoided damage as they raced at Turn 2, as Verstappen moved past the German in an already wounded car.

“I wasn’t anticipating being able to hold him off for so long, but I’m glad that I was able to and able to get the opportunity to fight with the top guys,” Schumacher said.

“I was fighting with Max twice on the road and was able to make my experiences in that case, feel the pressure and not crack under pressure. So I think it’s a really positive day for us.”

Schumacher was classified in 12th place, marking his highest result of the 2021 season so far.

His impressive race came one day after he failed to take part in qualifying due to a heavy crash towards the end of the final free practice session.

The reigning Formula 2 champion says his performance was a big morale boost after a disappointing Saturday at the Hungaroring.

“Of course, I think it gave everybody a bit of light at the end of the tunnel after a disappointing day [on Saturday],” Schumacher said.

“I think today was a very, very positive day. Lots learned, lots to take away from here, and lots for everybody to look forward to in the summer break and coming back to Spa.”