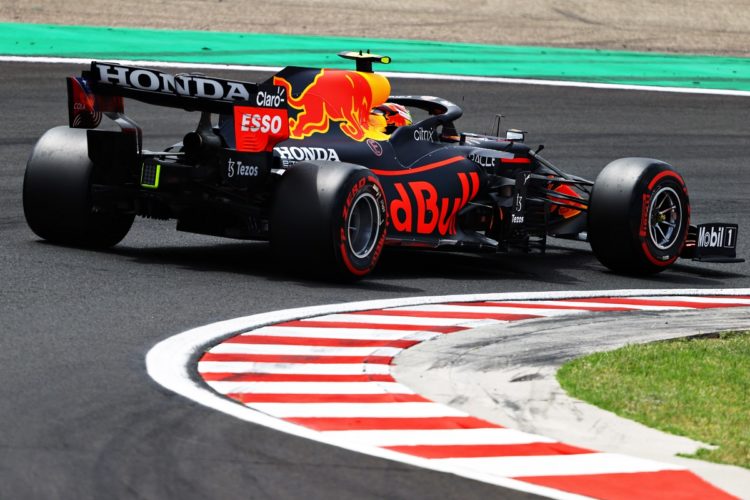 Red Bull fears it will have to scrap Sergio Perez’s Honda power unit from the Hungarian Grand Prix, after it was involved in a first-lap incident.

Perez was eliminated from the race at the opening corner of the race after being hit by Mercedes’ Valtteri Bottas.

Perez’s team-mate Max Verstappen was also involved in the crash, however the Dutchman was able to continue in the race, albeit with significant damage.

“It lost all its water immediately so we’ll have to look into more detail but the initial reports are it will no longer be in service,” Horner said.

Should Perez require a new engine at the resumption of the season in Belgium later this month, it will be his third of the season, putting him on the brink of a grid penalty.

Verstappen was forced to move onto his third unit in Hungary after Honda uncovered an issue post-qualifying, which it believes is a lasting effect of his Silverstone crash with Lewis Hamilton.

Amid Red Bull’s championship fight with Mercedes, Horner expects that his team will be forced to take a grid penalty at some point in the season for exceeding the power unit quota.

“Very little [hope of avoiding penalties] I’m afraid, and that’s hugely frustrating for Honda as it’s not due to reliability,” Horner said.

“It’s because of accidents that we haven’t caused, so they’re feeling the brunt of this as well as we are, and it’s not to be underestimated on the cost cap side.

“It’s something that does need to be looked at it because it is in a cost cap environment, it’s brutal. The incidents we have had during the last couple of weeks.

“Obviously you’ve got to look at what’s within the cap, it’s spare parts, the engines as well are particularly concerning. I think we need to revisit this with the FIA as it’s something that can affect all teams not just Red Bull.”