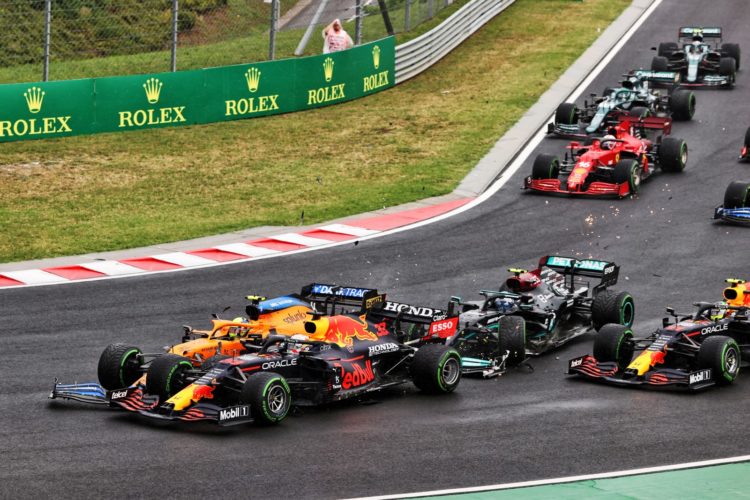 Lando Norris expressed frustration in the wake of the first-lap chaos in Hungary that left him out of the race.

Norris launched up to third in wet conditions at the Hungaroring but was rear-ended by Valtteri Bottas under braking for Turn 1.

The hit from Bottas pushed Norris into the side of Max Verstappen’s Red Bull, causing sizeable damage, while Bottas suffered a secondary impact with Sergio Perez.

In a secondary collision Norris’ team-mate Daniel Ricciardo was spun around after Lance Stroll collided with Charles Leclerc.

“Of course I’m angry because I was in third place,” said Norris. “I had a very good start and on lap one it is game over already. There are four or five people [in the media pen] because a couple of people just try way too hard.

“They think they can be a hero, and out-brake themselves and it ruins everyone’s race.

“Everyone knows that it is slippery, it is wet. Everyone makes mistakes at some point, and sometimes it is on lap one, but it is also lap one. It is a long race. Bottas has a much quicker car, and he probably would’ve passed me at some point in the race.

“Yeah, I don’t know what goes through their minds sometimes to try and do things like that.”

Norris was able to recover to the pit lane but McLaren swiftly determined that his MCL35M was too damaged to continue.

“At first it was like a puncture, they were checking everything and saw a lot of floor damage,” said Norris.

“We got the car back into the garage but when they took the covers off the whole thing was broken.”