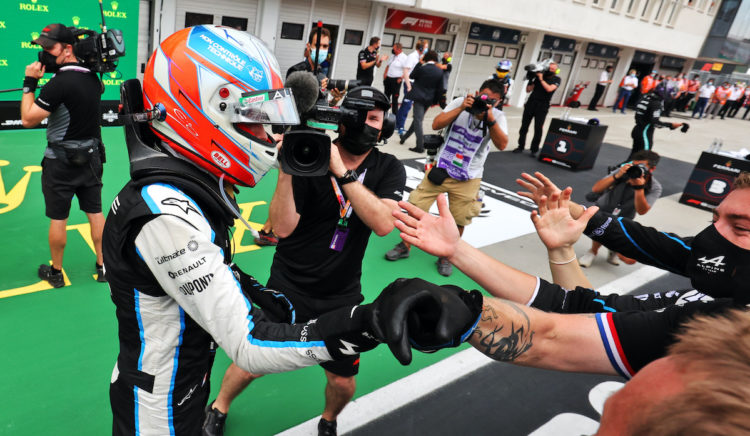 Hungarian Grand Prix race winner, Esteban Ocon, has credited Alpine team-mate and two-time Formula 1 World Champion Fernando Alonso for his part in the victory, as the Spaniard held off a charging Lewis Hamilton.

Ocon took a shock win following a chaotic opening lap, which saw him move into second place and then first when Lewis Hamilton pitted for slick tyres.

Hamilton charged through the field from last place to fifth, but got stuck behind Alonso who drove faultlessly for several laps to halt Hamilton’s progress. That almost certainly stopped the Mercedes driver from winning the race, as once he was passed Alonso, he quickly caught Sebastian Vettel and Ocon, but ran out of laps to mount a challenge.

Ocon thanked Alonso for the part he played in his maiden F1 win, hailing the “teamwork” at the Alpine team.

“What a moment, what a moment!” Ocon said after the race. “It feels so good. It’s the first victory obviously since the Renault group came back into Formula 1. We had some difficult moments this season that we overcame together with the team. We’ve come back to a fantastic place in Silverstone.

“And today, what can I say? it’s fantastic. Congrats to Fernando as well, because I think the win is also thanks to him with the fights that he did. It’s teamwork, all that. I think it’s been a fantastic day.

“It’s been awesome to work with Fernando. I mean since the beginning of the year, you know, we’re forming a real shock duo, I would say. We are working together. We are pushing the team, you know, to try and improve and get, you know, closer to the pack in front.

“Everyone told me a lot of things about Fernando before I came but you know, everything’s wrong. So I can tell you he’s a fantastic guy, and I am really enjoying the collaboration we have together.”

Ocon went on to thank the team for their support, having recently signed a new long-term contract which many questioned after a string of tough results this year.

“Just a big thank you for the trust that everyone is putting in me. In difficult moments, when you are out in Q1, when you are P17 you don’t know where you are exactly and the team kept a big trust.

“We are back where we belong so that’s fantastic. Sebastian was mega quick the whole race, put me under big pressure. We managed to hold him off so that was a great effort.”