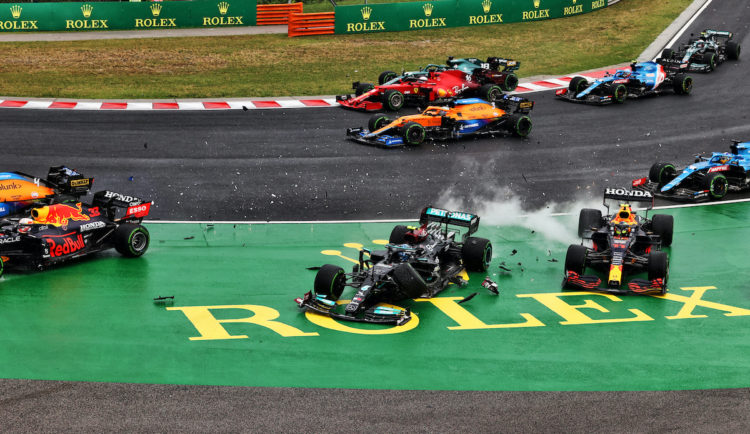 Formula 1’s Hungarian Grand Prix has been red-flagged after a chaotic opening lap in which five cars retired.

Rain fell prior to the start of the race, prompting drivers to take the start on the green-ringed Intermediate tyres, aside from Antonio Giovinazzi, who came in at the end of the formation lap for Mediums.

Second-placed Valtteri Bottas made a poor getaway and then locked up under braking for Turn 1 , running into the rear of McLaren’s Lando Norris.

Bottas’ trajectory took him into the path of Norris, who swiped title leader Max Verstappen, while Bottas had a secondary hit with Sergio Perez, forcing Pierre Gasly to take evasive action.

Verstappen was able to continue, albeit with sizeable damage to the right-hand-side of the car, and is down in 13th position.

Bottas and Perez were forced to retire though Norris was able to join Verstappen in staying in the race until the red flag was called. Norris would fail to make the restart due to damage.

In a secondary incident Aston Martin’s Lance Stroll carried too much speed into Turn 1 and eliminated Ferrari’s Charles Leclerc, while McLaren’s Daniel Ricciardo was spun around.

Several other cars sustained damage in the incident, including Nikita Mazepin who picked up a puncture from the debris.

Other beneficiaries include Carlos Sainz, up in fourth, Yuki Tsunoda in fifth and both Williams drivers, who hold sixth and eighth courtesy of Nicholas Latifi and George Russell.

The Safety Car was deployed before the race was halted due to the amount of debris.