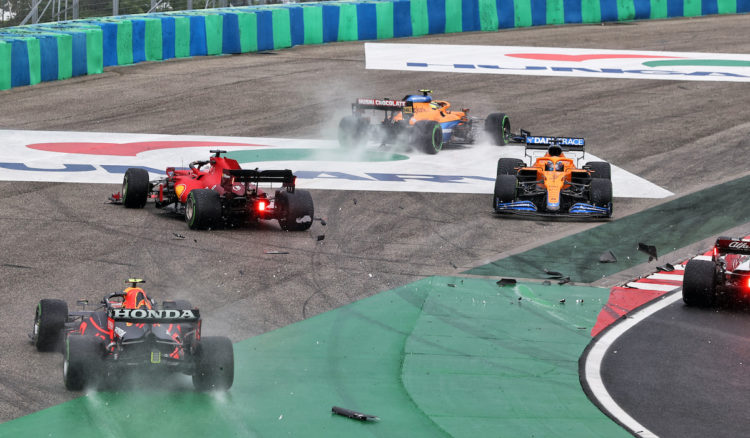 Mercedes’ Valtteri Bottas and Aston Martin’s Lance Stroll have both been handed five-place grid penalties for the next round on the 2021 Formula 1 calendar, the Belgian Grand Prix.

The pair were to blame for causing carnage on the opening lap as Bottas ran into the rear of McLaren’s Lando Norris at a wet Turn 1, also taking out Sergio Perez and causing damage to Max Verstappen’s Red Bull.

Stroll was also involved in a Turn 1 collision as he took to the inside of the corner, sliding into Charles Leclerc and Daniel Ricciardo. Stroll and Leclerc were forced to retire, whilst Ricciardo suffered heavy damage.

The incidents resulted in the retirement of six cars and the race had to red flagged to allow the marshals to clear up the resultant debris.

“Immediately after the start, in the braking zone to Turn 1, car 77 collided with the rear of car 4,” the report from the stewards read.

“The stewards took into consideration the track conditions, however the driver of car 77 was fully to blame for the collision.”

The stewards gave the same assessment for Stroll and both have beeb handed five-place grid penalties for F1’s return to action in Belgium following the summer shutdown.

The pair were also given two penalty points each on their FIA superlicence.

The incident had a major impact on the championship too, as Verstappen was only able to recover to tenth because of the damage to his floor and bargeboard, whilst Lewis Hamilton reclaimed the points lead, despite finding himself down in last place at the restart, before a recovery drive saw him finish third.