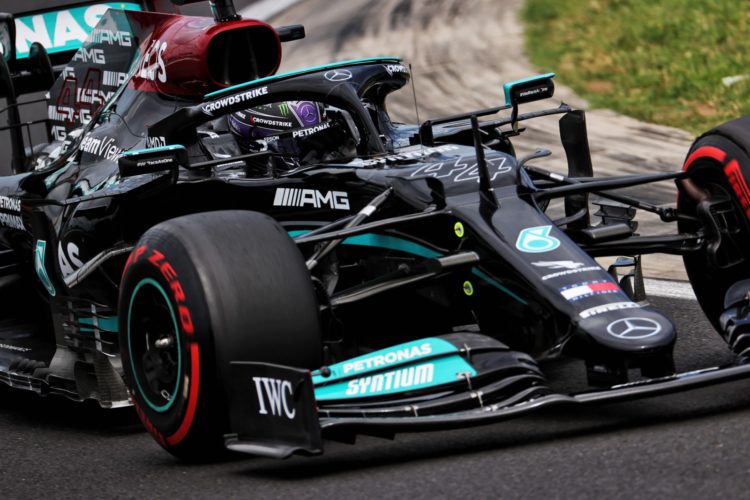 Hamilton, chasing his 100th Formula 1 victory, as well as a record-breaking ninth win at a single venue, beat team-mate Valtteri Bottas and title opponent Verstappen in hot and sunny conditions at the Hungaroring.

Hamilton clocked a best of 1:15.419s through the first Q3 runs, to wind up over three-tenths clear of Bottas, securing his 101st career pole position.

It marked his first pole position since the fourth round of the campaign in Spain and brought Verstappen’s run of five straight poles to an end.

In an unusual end to the session a slow out lap for the second runs, with the queue headed by Bottas, followed by Hamilton, meant fourth-placed Sergio Perez didn’t make it to the line in time, with Verstappen only just beginning his second push effort.

Neither Mercedes driver found time on their second runs and while Verstappen slightly improved his lap time he stayed in third spot, a tenth down on Bottas.

In another twist the leading teams diverged regarding their starting tyre strategies for the race.

Mercedes’ front-row starters will use Mediums for the first stint but Red Bull will utilise Softs for the opening phase.

Pierre Gasly bounced back from a difficult weekend at Silverstone by claiming fifth on the grid, ahead of McLaren’s Lando Norris and Ferrari’s Charles Leclerc.

Fernando Alonso had headed Alpine’s challenge in Q1 and Q2 but Esteban Ocon turned the tables in Q3 to take eighth at his team-mate’s expense.

Sebastian Vettel rounded out the top 10 in a closely-fought session in the midfield.

Daniel Ricciardo’s lacklustre season continued as he dropped out in Q2, where he was joined by Lance Stroll and the Alfa Romeo drivers, though his predecessor at McLaren fared worse.

Ferrari’s Carlos Sainz is set to start from a lowly 15th on the grid after crashing out on his opening push lap in Q2.

Sainz lost control of the car on the entry to the final corner and suffered a side-on impact with the barriers.

Sainz tried to continue after the accident, despite the severity of the impact, but managed only a few metres before the front wing lodged under the SF21, and he stopped at the exit of the turn.

George Russell made it through to Q3 in Austria and Britain, coming a couple of tenths shy of the second row of the grid, but in Hungary slumped to his first Q1 exit of the campaign.

A scrappy second push lap in Q1 thwarted his prospects but Williams lacked pace through much of the weekend.

Russell nonetheless maintained his unblemished Saturday record against team-mates at Williams, though Nicholas Latifi was within a tenth of a second, as he took 18th.

All three of this year’s rookies were eliminated in Q1.

Yuki Tsunoda crashed out of FP1 and had minimal running in FP2 as a result, and was only 16th in Q1, his best lap time over a second slower than AlphaTauri team-mate Gasly.

Mick Schumacher did not participate in qualifying in the wake of his sizeable accident during final practice earlier on Saturday.

Schumacher’s absence left Nikita Mazepin as the sole competing Haas and he duly finished slowest of the 19 participants, nine-tenths off Latifi.