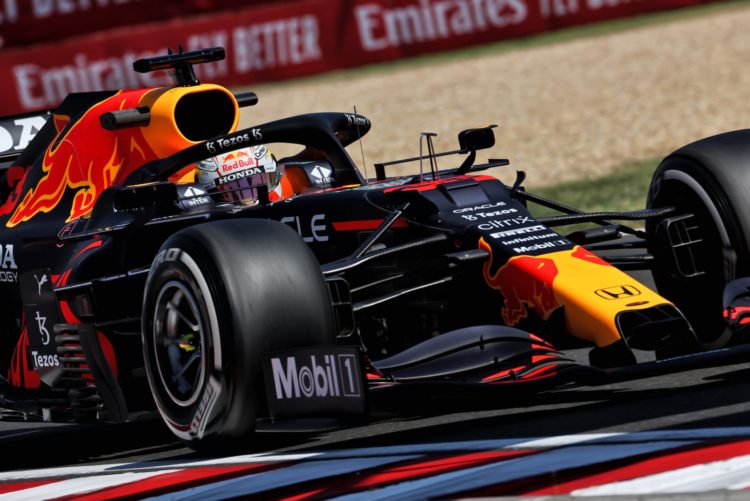 Max Verstappen set the fastest time during opening practice for Formula 1’s Hungarian Grand Prix, ahead of the Mercedes drivers.

Verstappen clocked a time of 1:17.555s to finish 0.061s quicker than Mercedes’ Valtteri Bottas in hot and sunny conditions at the Hungaroring.

World Champion Lewis Hamilton was third, 0.167s behind his title rival, as they returned to action following their clash at Silverstone.

Verstappen, who took his maiden pole position at the Hungaroring in 2019, leads Hamilton in the championship by eight points.

Carlos Sainz finished fourth for Ferrari, half a second behind Verstappen, with AlphaTauri’s Pierre Gasly bouncing back from Silverstone disappointment by taking fifth.

Fernando Alonso avoided damage to his Alpine A521 after a high-speed spin through Turn 4 and went on to classify sixth, a day after celebrating turning 40.

Perez was only eighth, nine-tenths behind team-mate Verstappen, as he lacked pace on his Soft tyre run.

Lando Norris was again the lead McLaren driver, though placed a subdued ninth, with Lance Stroll edging into the top 10 at the expense of Esteban Ocon.

Yuki Tsunoda brought out the red flags after losing control of his AlphaTauri AT02 through Turn 4.

Tsunoda, who had already had a harmless spin at Turn 9, spun and rear-ended the barriers, and immediately apologised to his AlphaTauri team over the radio.

The rear of the AT02 sustained only minor damage but the session was halted while the car was recovered.

Kubica has another Alfa Romeo run

Robert Kubica returned to Alfa Romeo’s C41 for his third practice run out of the season.

The Pole, who made his Formula 1 debut at the Hungaroring in 2006 and launched his comeback publicly at the venue during testing in mid-2017, finished 18th overall.

He was ahead of team-mate Antonio Giovinazzi, though the Alfa Romeo racer only managed five laps due to a technical issue.

Kimi Räikkönen will return to action for the second practice session.

Second practice for the Hungarian Grand Prix is scheduled for 15:00 local time