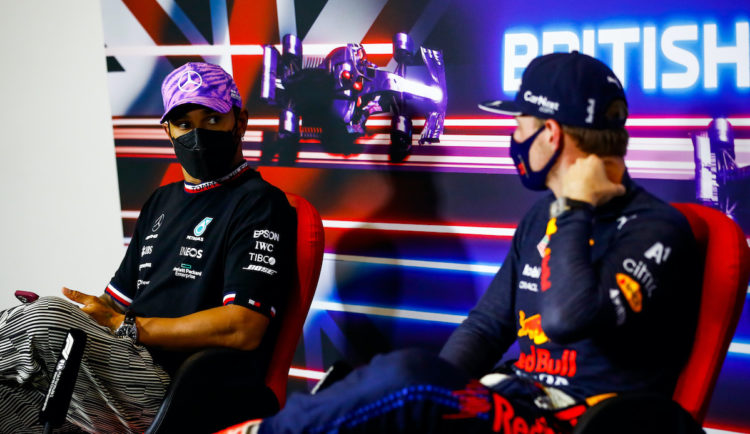 Formula 1 World Champion Jenson Button expects it will be fists out when F1 resumes this weekend in Hungary, in what will be the first meeting between Lewis Hamilton and Max Verstappen since their British GP clash.

Hamilton and Verstappen came together last time out at Silverstone which resulted in the Red Bull driver retiring from the race following a heavy impact with the barriers. The Mercedes driver meanwhile went on to win the race, despite a ten-second time penalty.

The collision saw a war of words break out between all parties involved, with Red Bull and Verstappen in particular hitting out at Hamilton with claims of “dirty driving” and “unsportsmanlike” behaviour for his victory celebrations.

The pair will meet again for the first time since the clash at this weekend’s Hungarian round – the last before the summer break – and Button is expecting it will be a “feisty one” as the pair look to be closely matched in car performance following Mercedes’ upgrades.

“It’s going to be a feisty one from here on, which is good for us watching but whether it’s good for them – I don’t know!” Button told Sky Sports. “Emotions are running so high, these are two of the best drivers that have ever driven F1 cars and it is going to be fisticuffs over the next few races.”

Button though is hopeful things won’t turn ugly and that the title duo will take time out this weekend to discuss what happened.

“We’ve just got to hope it’s done in the right manner. I think after this race hopefully they’ll discuss it, that’s what’s important to me it’s that these drivers understand what happened and they talk about it and they move on, and then they can fight as they should with the gloves off.”

The pair are split by just eight points as we reach the halfway point in the season and if Hamilton were to win and take the fastest lap point with Verstappen second, the pair would head into the summer break tied on points.