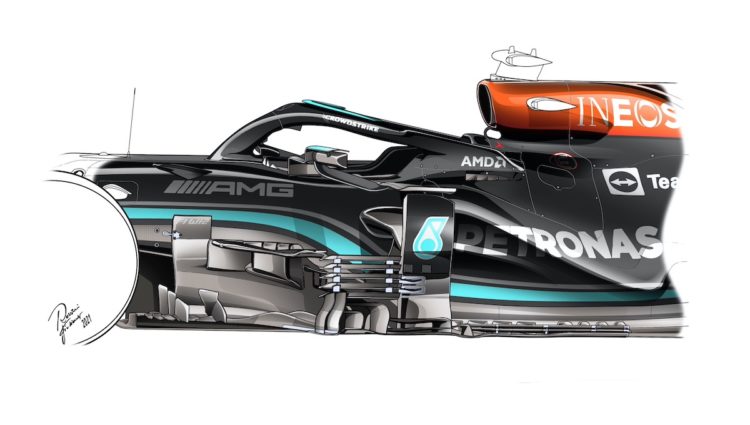 The British Grand Prix marked the return to victory for Mercedes, which haven’t won a race since the Spanish GP back in early May! Never since the advent of the turbo-hybrid era has there been such a win drought for the Silver Arrows, a clear sign that Red Bull is doing a great job with its RB16B this season.

At Silverstone Mercedes made some steps forward in terms of performance, on a track that went well with the characteristics of the W12.

The W12 seen on the historic English circuit has been equipped with important, long awaited aerodynamic updates. The team in this first part of the season failed to bring any updates, with the W12 basically remaining the same car seen from the first race in Bahrain (except for some minor adaptations to the various tracks).

James Allison has always admitted that the entire team of technicians is now entirely focused on the 2022 car, and that finding improvement on the W12 would only happen through a better understanding of its setup and balance.

However, with a world championship to conquer, against a Red Bull that introduces updates at each GP, the Stuttgart team decided to make a small effort for the 2021 championship, to counter the rival team on the technical front.

The changes seen at Silverstone concerned the entire central aerodynamic part of the W12, with new flow deviators (bargeboards) and a different floor layout.

With the new modifications Mercedes has set aside the floor with the wavy edge (also present on Aston Martin). A technical choice that surprised at the beginning of the season, only to prove too aggressive.

The technical focus of Mercedes’ engineers was to try to recover downforce at the rear of the car, both from the floor and from the diffuser. The W12 suffered a lot from the regulatory changes, and both Lewis Hamilton and Valtteri Bottas had to work a lot with the engineers to try to get the black car back into a balance between the front and rear axles.

The new diverters combined with the new floor manage the air flow in order to generate less turbulence, increasing the overall downforce in fast corners. It is not excluded that Mercedes may also review the rear part of the floor, after analysing the data collected with the new modifications fitted at Silverstone. Subsequent technical innovations should be concentrated in the rear area of ​​the car, and are expected around the Belgian GP.

Compared to Red Bull, Mercedes suffers on the straights. The lack of floor and diffuser downforce forced engineers to adopt a more charged rear wing solution than their competition, but this of course offers more drag.

Red Bull, for example, is in the completely opposite situation compared to Mercedes on this front, and the RB16B is among the single-seaters that chooses unloaded rear wing solutions, already having a lot of vertical load from a highly-efficient floor.

But with the news seen in Great Britain, something seems to have changed in Mercedes, and for the first time this year we saw a W12 with a very low rear wing (even more light than Baku) and a single pylon.

In Hungary we are moving towards a completely different track, making it difficult to predict whether Mercedes will be able to reconfirm itself at the top of the results.

Budapest is a tortuous track with a lot of downforce, often compared to Monaco for the type of set-up that is usually adopted. With these modern F1 cars, however, the corners of the Hungarian circuit are all medium speed in the central sector, where the W12 can exalt itself by exploiting its skills in insertion.

On the other hand, traction counts more in sector one and three, where there are slower corners. This is where the W12 struggles much more than Red Bull, which manages to be more effective at low speed.

However, Mercedes is not giving up. Budapest could turn out to be a replica of what we saw in Spain, a track in which we can find enough similarities with that of Budapest.

Red Bull’s race fell apart in Silverstone due to the incident in the Copse corner, and the mistake in Sergio Perez’s Sprint Qualifying. These two episodes heavily influenced the final result of the race and we were unable to see the true pace of the RB16B compared to the W12.

Overall, the performance of the RB16B seen at the weekend was equal (if not superior in certain situations) to Mercedes.

For Budapest Red Bull remains the favorite, with Chrstian Horner’s team ready to redeem themselves after the painful blow they took last week. The Milton Keynes team continues to amaze with the novelties that each GP manages to introduce, without ever having a car the same as the previous race.

This trend was confirmed at Silverstone, with the RB16B still subject to aerodynamic updates: For Max Verstappen they brought a revised floor in the area of ​​the vortex generators in front of the wheels, with a shape that slightly recalled what was seen on the AlphaTauri. In fact, an element has been added that forms a sort of upper horizontal plane, which connects three flow deviators in the rearmost part like a bridge.

Above all, it is surprising how Red Bull manages to bring innovations to the track that are immediately promoted, showing an excellent correlation between track and simulator data. Compared to Mercedes, Adrian Newey’s technical management prefers updates to be spread over the course of multiple GPs, rather than introducing a full-bodied package of changes in a single appointment.

The Silverstone floor is a complementary novelty in relation to the updates seen in the two races in Austria, where new flow deviators had appeared on the RB16B. At Silverstone Perez was able to take advantage of the modifications that were present on Verstappen’s car in Austria, including the new bargeboards.

With a view to Hungary, the new floor will also be implemented on the Mexican driver’s single-seater. The incident that occurred at the Copse curve will have a heavy impact in financial terms. Certainly Verstappen in Hungary will have to have a new chassis, along with gearbox and other components.

The Power Unit, sent to Japan for a check-up that will confirm whether its integrity in the next few days, after the heavy impact of 51G occurred to the Dutch driver on the first lap, is a little cause for concern. In case of a negative result, Verstappen will have to use the third unit already in Budapest. This will result in Max having to compete for the rest of the season with this unit, in order not to incur penalties. A rather trying mission for the Power Unit, at a time of the season where any detail will make a difference.

On the technical front, the single-seater designed by Adrian Newey remains in constant evolution, and the whole team firmly believes it can bring to Milton Keynes a world championship that has been missing since 2013.