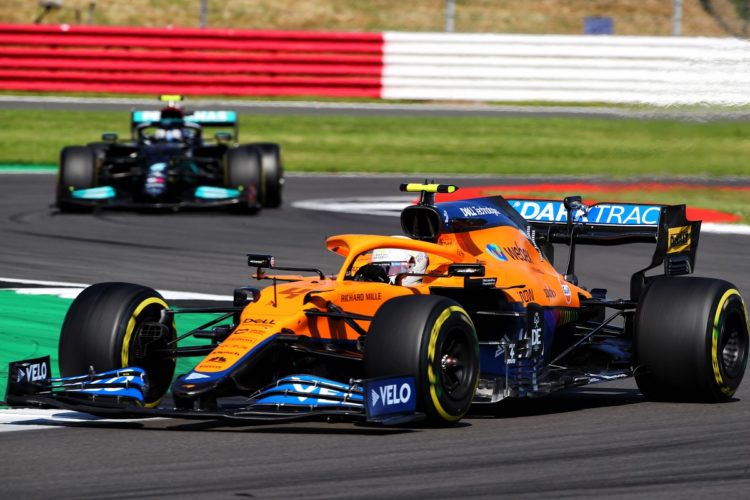 McLaren’s Lando Norris admits he is annoyed over missing out on the chance to fight for a podium finish at the British Grand Prix.

The 21-year-old was running in third place until a slow pit stop dropped him behind Mercedes’ Valtteri Bottas.

Norris, who has three podium finishes so far this year, went on to finish fourth, ahead of team-mate Daniel Ricciardo.

“Especially here, fourth is still a very good result for us,” Norris said.

“So it’s not like I’m really annoyed, I’m just annoyed that I did not get the opportunity to fight and put on a good show and at least have some battling and racing.

“It’s been a fun weekend and a pleasure to have all the fans back, it has been a lot more enjoyable because of that.

“It means a lot more as a driver, so I cannot wait to come back next year and give it another shot.”

Norris asserts that there was no guarantee that he would’ve been able to hold off Bottas during the second half of the race, had he emerged from the pits in front.

“For sure we would’ve come out ahead of him. It is the way it is sometimes I do not know what the reason was for it.

“There were plenty of positives, good starts all the time. I put myself in a good position and held Bottas off for the first stint, even when he was in a much quicker car.

“So I am happy about a lot of things, and disappointed with the couple. At the end of the day it was a good race. Of course with Charles [Leclerc] finishing P2, a good amount of points for them. But we did well. Daniel did well this weekend.”