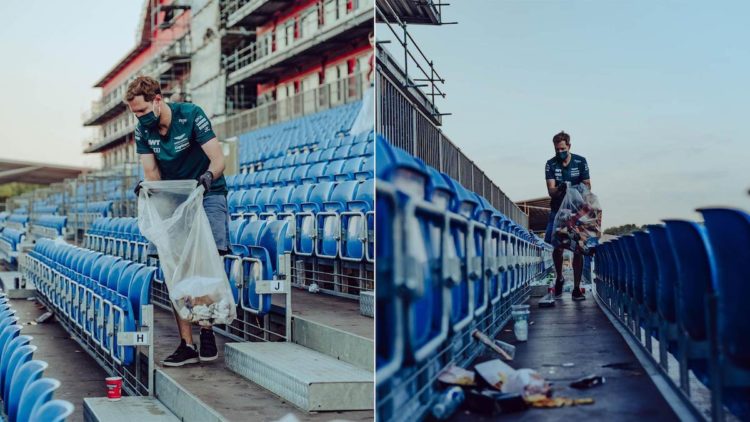 Sebastian Vettel’s British Grand Prix ended in disappointment after a mid-race spin followed by a retirement, but that didn’t stop the Aston Martin driver from participating in a clean-up operation around the circuit.

The four-time World Champion pulled on a pair of gloves and grabbed some bags as he joined in the effort to clear the grandstands of rubbish left behind by the 140,000 spectators.

Vettel looked set for a points finish as he had been running within the top ten, but as he battled Alpine’s Fernando Alonso, he dipped a wheel on the grass and spun, dropping him to the back of the pack, before later retiring.

“The weekend was looking promising and, without all the problems, I should have finished well inside the points. I am very disappointed to lose the car in a wheel-to-wheel battle with Fernando [Alonso]. I am not sure exactly what happened, but I misjudged it, lost grip, and spun.

“After that, I was right at the back. In the end we did not finish the race because the team retired the car with a cooling issue.”

Many wouldn’t blame the German for heading home, but Vettel stayed behind to collect rubbish in a feel good story from an action-packed race weekend.

Vettel has taken part in several off-track activities recently. In Austria he helped to build a bee hotel at the Spielberg circuit which was based on an F1 car and he handed out wild flower seed packets to fans.