by Phillip Horton
A A
9 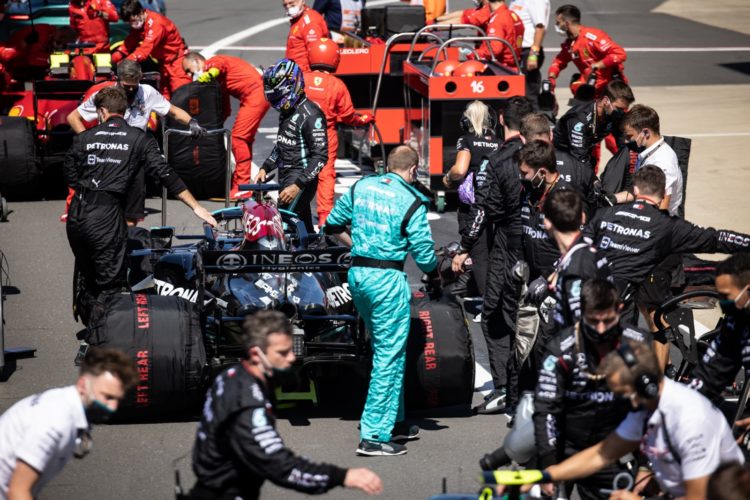 Hamilton and Verstappen collided at Copse on a frantic opening lap at Silverstone in which they battled for the lead on several occasions.

Verstappen was pitched into a heavy accident following the contact and the race had to be suspended to the damage to the tyre barrier.

Mercedes was able to evaluate Hamilton’s W12 during the race suspension and he restarted from second place, behind Charles Leclerc, going on to pass the Ferrari driver in the closing stages.

“We’d failed the rim, where we’d had the contact on the front left, so that would have been a DNF had it not been red-flagged,” said Mercedes’ trackside engineering director Andrew Shovlin.

“But the rest of the damage was remarkably little – it was a tyre temperature sensor that had got knocked loose so was waggling around.

“But it was the least important part on the front wing and it was the only [bit] that broke.”

Hamilton received a 10-second time penalty for the contact but still went on to overhaul long-term leader Leclerc in order to take victory.

“We didn’t think the penalty was deserved, if you look at the guide that the stewards have to determine who’s at fault in terms of overtaking, Lewis was sufficiently alongside and we felt Max should have given him room,” he said.

“If you look at the sprint race and the opening lap Lewis was constantly having to back out of it to avoid a collision and he was able to put his car into a position where he could stand his ground.

“Max drives aggressively and it’s inevitable that one day we’re going to get an accident.”