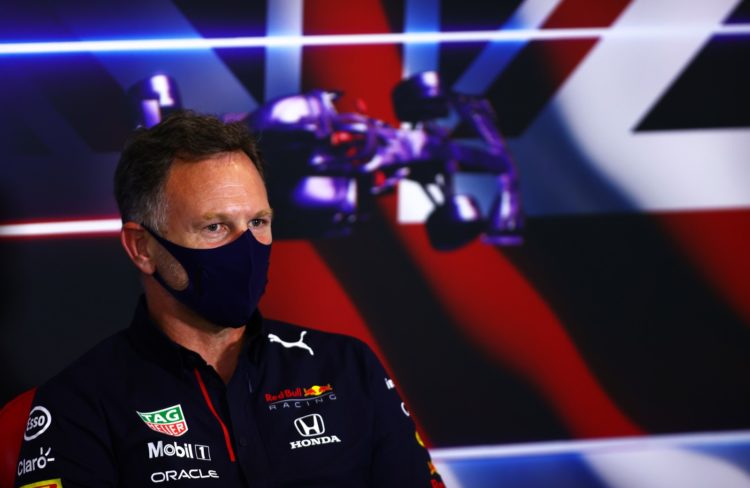 Red Bull Team Principal Christian Horner redoubled his criticism of Lewis Hamilton after his collision with Max Verstappen at the British Grand Prix.

Hamilton and Verstappen came to blows on the opening lap at Silverstone through Copse corner as they contested the lead of the race.

Verstappen suffered a sizeable impact, measured at 51G, and was taken to hospital for checks as a precaution.

Hamilton was handed a 10-second time penalty, having been deemed predominantly to blame, and he recovered from fourth to claim victory at Silverstone for a record eighth time.

Horner heaped criticism on Hamilton in the immediate aftermath of the contact and continued to hit out at the Mercedes driver when speaking with written media after the race.

“If you look at the overhead he’s run wide into the corner,” said Horner.

“He’s carried too much speed. That move was never on. Lewis is a world champion of seven titles. That was an amateur’s mistake and a desperate mistake.

“I can’t see how Lewis can take any satisfaction from a win when he’s put his fellow driver in hospital.

“It’s disappointing, it’s extremely annoying. His actions have put in jeopardy another driver’s safety and for me that’s unacceptable.

“[He was] lucky not to have the same crash with [Charles] Leclerc – if Leclerc hadn’t run wide and taken the line he’s entitled to then the same incident would have prevailed.”

Horner added that Verstappen has “been through all the precautionary scans and retained consciousness at all times.

“He is battered, he is bruised, it is the biggest accident of his career, a 51g incident.

“I’m just grateful that it is not worse than that, that he was able to get out of the car and walk away as it was an enormous accident.”