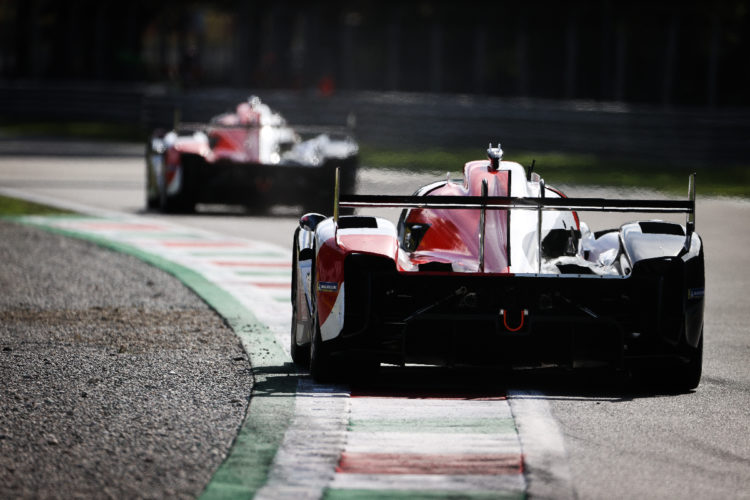 The championship leading Toyota has dropped out of contention for the Six Hours of Monza after two hours of racing.

The #8 Toyota GR010 Hybrid, driven by Brendon Hartley, had two separate trips to the garage.

First, Hartley reported a loss of power which was changed quickly, but when it was back out, it suffered what appeared to be a brake failure, which saw it go back into the garage. This prompted the full left corner on the car to be changed.

Hartley is running again, but several laps down. Team-mate Jose Maria Lopez leads overall in the #7 Toyota, with Matthieu Vaxiviere second in the #36 Alpine A480-Gibson and Franck Mailleux promoted to third in the #709 Glickenhaus 007 LMH.

Ferdinand Habsburg has regained the lead in LMP2 in the #31 Team WRT ORECA, after United Autosports took the lead in class at the start.

The #22 ORECA of Filipe Albuquerque sits in second place, with third in the hands of the #28 JOTA ORECA driven by Sean Gelael.

Kevin Estre has handed the #92 Porsche 911 RSR-19 of Neel Jani, who still leads the race in GTE Pro. James Calado sits in second in the #52 Ferrari 488 GTE Evo, while Richard Lietz currently holds third place in the #91 Porsche, although involved in a fierce battle with the #52 Ferrari.

Ben Keating, on an alternate strategy, leads the GTE Am class from the start as the #33 TF Sport Aston Martin Vantage AMR from the #83 AF Corse Ferrari 488 GTE Evo is second in the place of Francois Perrodo.

The chrome Ferrari started the race from the back, but a strong opening stint from Alessio Rovera brought the car back into contention. The #83 Iron Lynx Ferrari 488 GTE Evo of Sarah Bovy sits in third.

The #47 Cetilar Racing Ferrari 488 GTE Evo, in contention in the early running, has fallen away after a crash by Roberto Lacorte. Lacorte lost control of his car on the exit of the second Lesmo, but was able to get the car back into the pits.