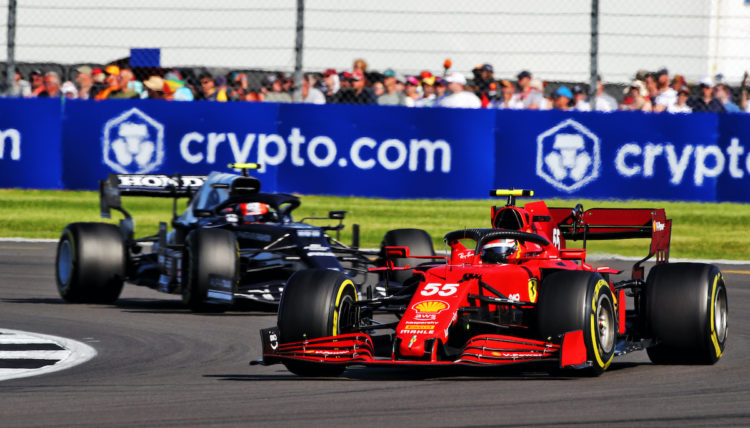 Ferrari’s Carlos Sainz has laid the blame for his poor Sprint result firmly on George Russell who, according to the Spaniard, made an “obvious mistake”.

Sainz attempted to pass Russell around the outside at Lufffield, but the pair made contact, forcing Sainz onto the run-off. He dropped from ninth to 19th, before recovering to finish 11th in the first ever Sprint event.

The incident is under investigation by the stewards, and Sainz believes it was clear who was to blame: “I think it was a pretty obvious mistake by George there,” he told Sky Sports.

“I guess it’s difficult for us in dirty air, you know, following each other. It’s easy to do mistakes like he did, but obviously it cost me quite dearly today.

“Going from 9th, I think we were battling, to last and then having to come back to P11 and finishing behind him hurts because this time it’s not my mistake.”

Sainz believes he was on course for a strong result after team-mate Charles Leclerc rose to fourth having shown strong pace.

“The pace was there. I had fun, honestly, coming back from P20 even though there were a lot of DRS trains. I managed to make a few good moves and get myself back into a decent position but still, you know, it has cost me.

“I should have finished around P8, P7 and be in a good position for tomorrow and unfortunately this has cost me quite a lot.”

Russell, understandably, disagreed with Sainz’s assessment of the clash: “Carlos came from wide and cut in. I saw him, but nothing I could have done with the angle I was at. He was closing the gap,” he said, insisting it was just a racing incident: “It’s one of those first-lap things.”