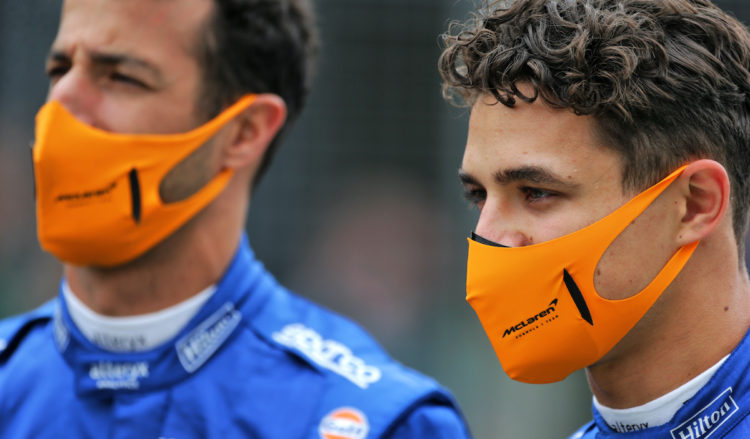 McLaren’s Lando Norris says he’s “feeling sore” after he was mugged during the Euro 2020 final at Wembley last week, in which a £40,000 watch was stolen.

The Briton has also had trouble sleeping after the incident and is working on being fit for this weekend’s British Grand Prix – his home event.

“I’m fine… but I’ve been better, I can say that,” Norris told Sky Sports. “I’m not in perfect condition, I’m not going to lie.

“Some work to do, mentally. Of course I talk about that a lot and mental health, and mental strength is very important. I’ve not been sleeping that great, and so on.

“Not ideal and I’m feeling a bit sore. But I’m not the guy in the worst position after Wembley. I’ll work on it, I’ll make sure I’m in the best shape possible and I feel like can still go out and focus on what I need to do and that’s the main thing.”

England lost to Italy on penalties, which saw a small number of fans turn violent in the aftermath, with multiple injuries reported.

Norris added: “It’s tough, not the night I wanted, and I guess not the night we all wanted from an England perspective and definitely not the way I wanted it to end.

“It’s not the nicest experience for anyone to go through and it’s not only me that it’s happened to, it’s happened to other people. It’s something I don’t wish upon anyone and of course if anyone else goes through it, I can sympathise with them and I know what they feel like.”

The 21-year-old heads into this weekend on the back of a strong run of form, which has seen him score in every race this year – the only driver to do so – sitting fourth in the championship standings, ahead of Mercedes’ Valtteri Bottas.