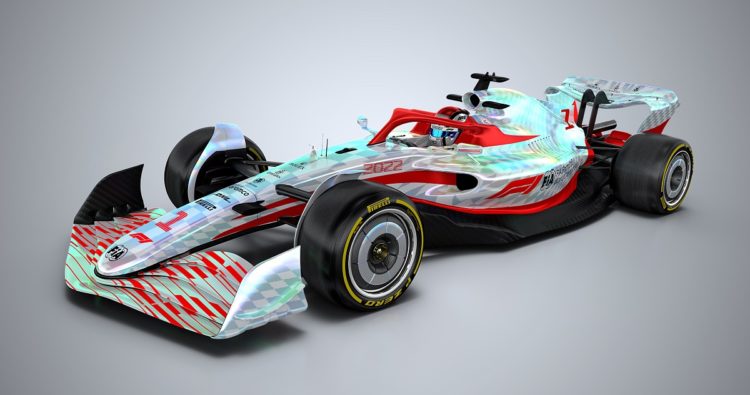 Formula 1 has unveiled its own promotional 2022 car, giving fans a glimpse of what next year’s versions should look like.

New technical regulations will come into play next year, aimed at closing up the competition at the front of the field, as well as allowing for closer on-track racing.

The new cars were originally scheduled to be introduced in 2021, however they were pushed back by one year due to the Covid-19 pandemic.

Gallery: Check out the 2022 F1 car in full and from every angle

“It feels like a very long time ago the FIA officially unveiled the regulations for the future of the sport, but after the one-year delay due to the pandemic it’s only 170 days to go until the start of 2022 when we will see the next generation of Formula 1 cars take to the track,” said F1 managing director Ross Brawn.

“There is huge excitement ahead of this new era, and while 2021 has been a great battle we still have cars struggling to follow each other during the race. The regulations for 2022 will address this problem and create an opportunity for closer battles and more wheel-to-wheel racing.

“The combined effect of the new aerodynamic regulations and financial rules, in the form of the cost cap, will create the conditions for a more balanced championship and for the gaps across the grid to close.”

The 2022 challengers will see the return of a ground-effect floor, which will produce a cleaner wake through the underbody of the car. Simpler front wings, as well as a revamped rear wing, will also be included.

Bargeboards, which have been a key area of downforce development in recent years, have been outlawed in the new regulations.

Another noticeable addition to the cars will be 18-inch Pirelli tyres, which have been going through a testing programme throughout 2021. The tyres are aimed to be less sensitive to temperature, allowing drivers to push harder, for longer.

Wheel covers will also make a return, having been outlawed in the sport since the end of the 2009 championship.

The current 1.6 litre V6 turbo engine will remain in the regulations, however development will be frozen until 2025.

Much of the development focus on the grid is currently directed at next year’s cars, as teams aim to start the 2022 campaign on the front foot.