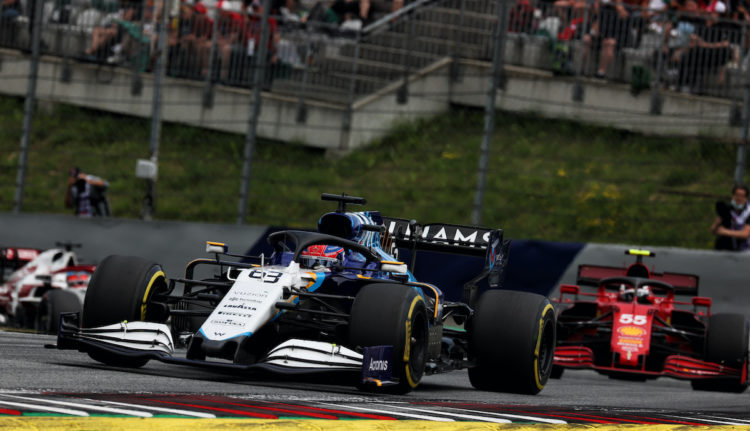 Whilst other drivers are predicting Formula 1’s new Sprint Qualifying format to produce little more than a procession, George Russell sees it as an opportunity for Williams to improve its starting position for Sunday’s grand prix.

This weekend’s British GP sees a shake-up to the traditional format, with a short 100km race taking place on Saturday that will decide the grid for Sunday’s main event.

Russell believes some drivers will take a conservative approach to protect their cars, particularly those higher up the order, whereas those at the back have “got to go for it” to capitalise on every opportunity with a lower risk factor.

“If everybody’s conservative, then it gives an opportunity to the one who’s going to be a bit more out there,” Russell told the F1 Nation podcast. “Obviously if I was Verstappen or Lewis at the front of the grid, you’re not going to go for a reckless overtake and risk not finishing the race, because they can qualify in the top five, or start in the top five for Sunday and still finish first or second.

“But in a position like us, where you’re at the back of the grid you’ve got to go for it, so this is an opportunity because there are going to be people who have a different approach.

When asked if the format needed mixing up, Russell agreed that whilst the traditional qualifying-race format has worked well for a number of years, it is worth experimenting to offer fans a greater level of action and entertainment.

“There’s a mixed view,” the Briton replied when asked how the drivers felt about the change. “Personally I think changing the format to have three days of action is great. The fans deserve it, we deserve it. If we can increase the numbers of days of action then that’s a win-win, so that’s definitely a plus.