Binotto expects ‘some set-up mess’ due to format, tyres 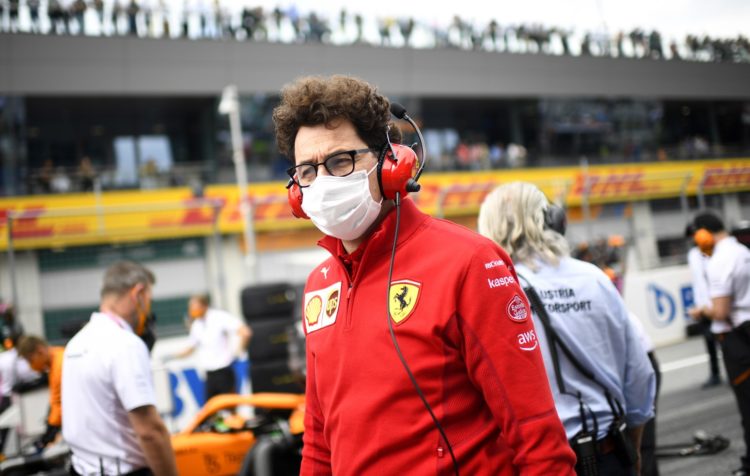 Ferrari team boss Mattia Binotto believes some squads will compete at Silverstone with compromised set-ups due to the revised weekend format and new tyre construction.

Formula 1 is adopting a refreshed format for this weekend’s British Grand Prix, with Sprint Qualifying taking place on Saturday, meaning qualifying is shifted to Friday.

As a result there will only be two practice sessions, the second of which will take place on Saturday afternoon; teams can work on set-ups during this session but must then revert to parc ferme for Sprint Qualifying.

Teams will also have use of Pirelli’s revised rear tyre construction after its introduction was approved by the FIA’s World Motor Sport Council last week.

Formula 1’s sole supplier brought a revised rear tyre construction for teams to trial during practice in Austria in order to improve the rubber’s integrity.

“We should keep in mind we have a new tyre specification in Silverstone,” said Binotto.

“Yes, we tested it in Austria but most of the teams need again to have some more experience on it.

“There will be very little time for it because we’ve got only the Friday morning before going into the quali.

“So I think going straight into the quali with a new tyre spec, anyway it is a new format, very little experience because then it will be parc ferme from Friday afternoon onwards, will be exciting.

“I think that [for] some, there may be some mess because the set up will not be optimised. I think it can be a great race weekend in that respect.”

Formula 1 is due to trial Sprint Qualifying again in Italy and, most likely, Austin.

Binotto suggested the new format should be run in case Formula 1 is forced into running multiple events at the same venue.

Formula 1 held two races in Austria in 2020 and 2021, Silverstone hosted successive rounds last year, as did Bahrain – albeit on differing layouts.

“I think in the future if we’ve got two races at the same circuit, we may consider the sprint qualifying race format again try to change a bit the format of the weekend,” he concluded.