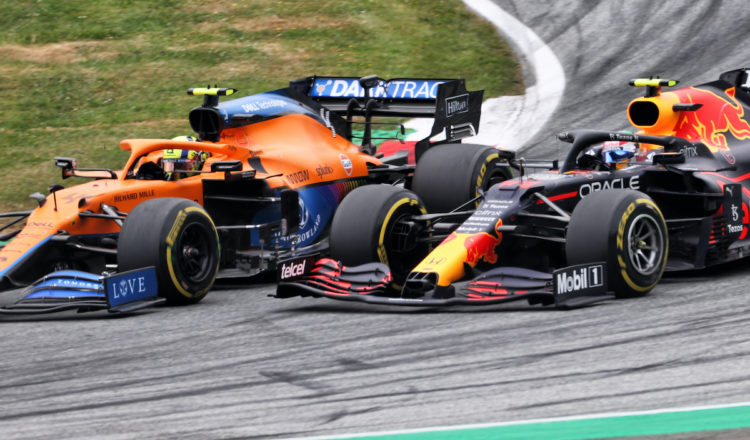 McLaren’s Lando Norris believes the manner in which some penalty points are distributed in Formula 1 is “stupid” after he edged closer to a ban.

Under current regulations drivers are set to receive a one-event suspension if they accrue 12 penalty points on their licence within a rolling 12-month period.

Norris was handed two penalty points on his license in Austria after he was judged to have forced Sergio Perez wide during the early stages of the race.

That incident brought Norris up to 10 penalty points – albeit two of which will be removed from his record prior to the next event in Britain.

He previously received penalty points for a red-flag infringement in Azerbaijan last month, and for ignoring yellow flags in Turkey last November.

“My approach of the incident in Baku with the red flag and not boxing when I should have done,” Norris began. “Like, I didn’t put anyone in harm’s way, in fact it was the opposite and I did everything safely, like why should I deserve penalty points for that?

“Why should I deserve penalty points for someone going into the gravel? Yeah, nothing I’ve done is dangerous and I don’t feel like, maybe in some cases you deserve an on-track penalty, because you’ve done something bad in terms of racing and you just made a mistake but then you have things that people do every now and then which are purely dangerous.

“If you do genuinely overtake in a yellow flag and do something else that’s clearly a rule that will put people in danger then I understand penalty points for a driver and if that adds up you get a driver ban or race ban but for little things like this, it’s stupid in my opinion. It’s not what Formula 1 should be.

“I would expect and hope that other people would back me up on this kind of opinion.”

Perez is also on the brink of a potential suspension after moving up to eight points.