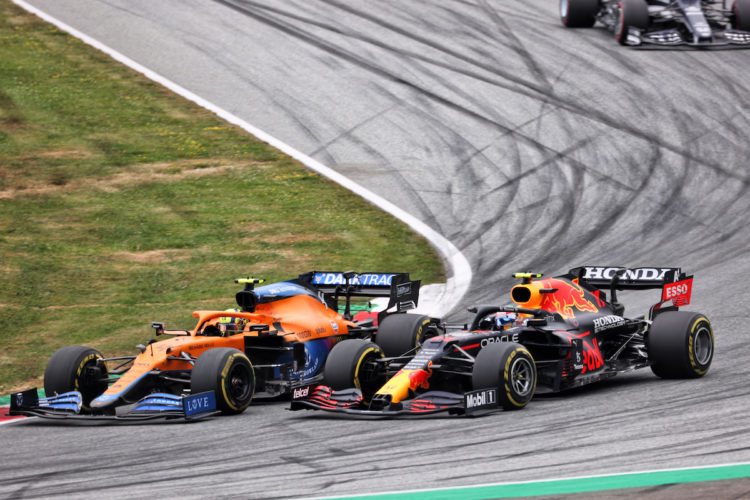 At a safety car restart early in the race, Perez attacked Norris around the outside into Turn 4.

The Red Bull driver was ushered wide and dipped his car into the gravel, demoting him a number of positions on the track.

Norris, who eventually finished third, was issued a five-second time penalty for the incident – however he asserts he did little wrong.

“I’m disappointed because it should’ve been second place,” Norris said. “I thought that lap one was just racing really.

“He tried to go around the outside, which was a bit stupid, and he just ran off the track himself, I didn’t even push him. I’m frustrated but I’m also happy with P3. We had very good pace.”

In the latter stages of the race, Norris overtook Mercedes’ Lewis Hamilton for third place, as the seven-time world champion was struggling after sustaining damage to his car.

Norris then set his target on catching Valtteri Bottas, having moved behind him while serving his penalty during his pit stop.

Although he was able to run close to the Finn, Norris couldn’t break into the one-second DRS zone, but nevertheless takes encouragement from his and McLaren’s pace.

“We had good pace and I could keep up with him a lot, even in dirty air, but not enough to get into the DRS,” Norris reflected.

“As soon as I got within or close to a second, I started struggling too much. ‘Shoulda, woulda, coulda’ in the end.

“It’s nice to know that we can be there and we can race them, it was the first race in many years of actually racing the Mercedes’ and the Red Bulls. Hopefully we can keep it up next time.”