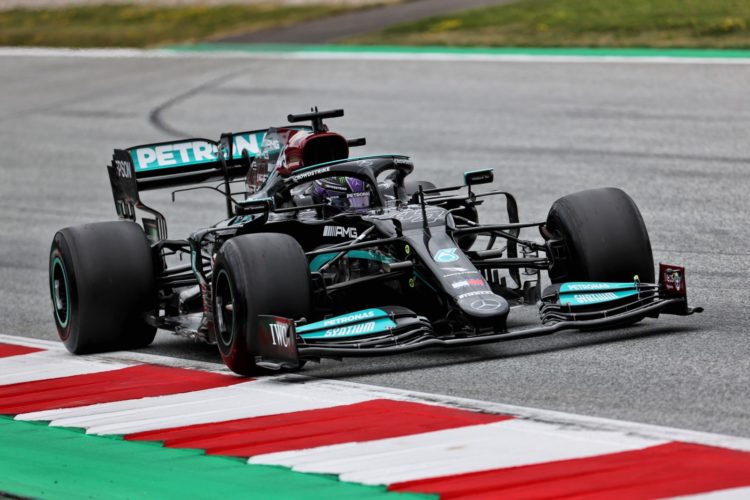 Verstappen is chasing a clean sweep of pole positions and victories in Formula 1’s current triple-header with Red Bull in search of a fifth win on the bounce.

Verstappen led the way during first practice at the Red Bull Ring on Friday, and headed the timesheets on Medium tyres, but was overhauled by the Mercedes duo when Soft tyres were fitted.

Hamilton clocked a time of 1:04.523 to finish 0.189s clear of Mercedes team-mate Valtteri Bottas, with Verstappen able to slot in only to third, 0.217s behind the Briton.

Those times came in cloudy and cool conditions at the Red Bull Ring before light rain began to influence proceedings.

Hamilton locked a wheel and shot wide through the Turn 4 gravel on his race simulation but was able to stop short of the barriers and recover to the circuit.

A close battle for fourth

The leading trio held an advantage over the rest of the field, with Verstappen almost four-tenths clear of his nearest rival, but behind it was a closely-fought session.

Lance Stroll and Sebastian Vettel wound up fronting the midfield charge as they classified an encouraging fourth and fifth respectively for Aston Martin.

AlphaTauri also had a strong day, with Yuki Tsunoda and Pierre Gasly sixth and seventh respectively, ahead of Alpine driver Fernando Alonso.

Lando Norris and Daniel Ricciardo both backed off their first push laps on Softs but while Norris recovered to take ninth his team-mate was left down in 15th spot.

Norris also had a late spin on his race run when he lost the rear of the MCL35M exiting Turn 1.

Antonio Giovinazzi clocked the 10th-best time, capping a promising day for Alfa Romeo, and in the process pushing Red Bull’s Sergio Perez down to 11th.

Alpine’s Esteban Ocon was 12th, while Ferrari had a low-key session, as Carlos Sainz and Charles Leclerc took only 13th and 16th, albeit their Soft tyre runs coming as the rain started to fall.

Russell further back – but in the mix

George Russell outlined Williams’ potential at last weekend’s event as he almost made Q3 prior to spending the first stint of the grand prix comfortably in the top 10.

A power unit issue ultimately robbed Russell of the opportunity to challenge for points on merit but remaining at the Red Bull Ring has given Williams hope that it can end its near two-year drought.

Russell finished the second practice session down in 17th place, ostensibly at the rear of the midfield, but only seven-tenths of a second separated the Williams driver from fourth-placed Stroll.

Even Haas was in a relatively bright position, with Mick Schumacher able to clear Nicholas Latifi, in the process lapping just shy of a tenth back from Russell.

Nikita Mazepin, slowest of the runners, was within two-tenths of Latifi, ensuring that all 20 drivers lapped within 1.7s of pacesetter Hamilton.