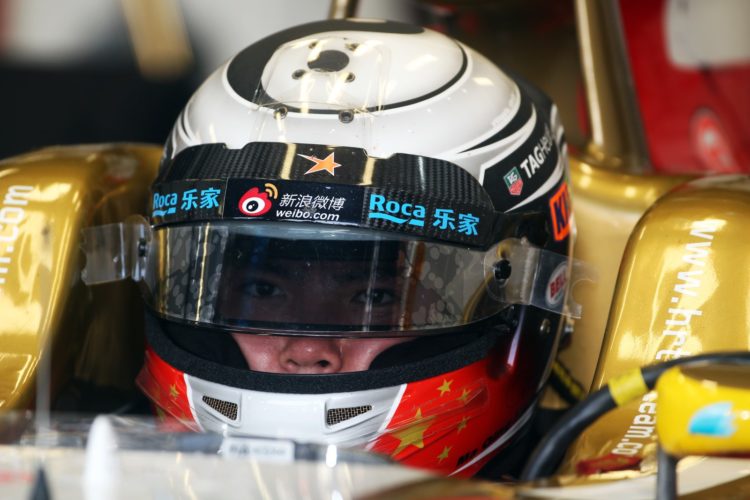 Guanyu Zhou is set to participate in Formula 1 practice with Alpine at the Austrian Grand Prix on Friday, marking a first grand prix weekend appearance for the Formula 2 title leader.

He will be only the second driver from China, the world’s most populous country, to take to the circuit in Formula 1 machinery at a grand prix event.

The first to do so is a friend of Zhou’s, someone who spotted his compatriot’s talent in the early 2010s, before his own runs in Formula 1 machinery.

Ma Qinghua, currently residing in Shanghai, has been plying his trade in China-based categories during the pandemic, prior to which he had spells in World Touring Cars and Formula E.

Back in 2012 Ma became the first Chinese driver to participate at a grand prix weekend, running for the backmarker HRT squad at Monza, Singapore, Yas Marina and Austin.

Then 24, he had limited top-line experience, having only raced sporadically in Formula 3-level and tin-top series prior to his Formula 1 bow.

“I had a lot of emotion for that [run],” Ma relates to MotorsportWeek.com. “In 2012 all the legendary drivers I knew from my childhood were there, such as Lewis Hamilton, Sebastian Vettel, Kimi [Raikkonen], Jenson Button. They were my idols, when I was racing in go-karts, or Formula 3, so it was a very special feeling – and Monza was one of my favourite circuits.

“I remember also at Monza, and nearby, there were some Chinese fans, they were waiting for me on the grandstands, and also afterwards they were waiting outside of the paddock just to take a photo with me and an autograph. At that moment, when you’re far away from home, some people made you feel at home, and that was a very nice memory.”

Ma’s Formula 1 journey extended briefly into 2013, having switched to tailenders Caterham, with a fifth and final FP1 outing come on home soil.

“It was another special moment because 2013 was the tenth year of the Chinese Grand Prix taking place in Shanghai,” he says. “In the first year when Formula 1 came to China, in Shanghai, I was a spectator – I was in the grandstand, and when I was racing in go-karts I dreamed one day to drive the real car on that circuit. It’s a very short distance from the grandstand to the paddock but as a driver it’s a very long way to go!

“When I had the seat at Caterham for the FP1, that was a different feeling compared to the FP1 at Monza, [as I was] in my home town, in the circuit [that] I had watched being built. My family, my friends, they all came to support [me].”

For seasoned campaigners FP1 sessions can be uninspiring run of the mill affairs but on that Friday the home representative was firmly in the spotlight.

“That year the other teams, like Ferrari, McLaren and Red Bull, they were the teams chasing the championship and most of the cameras, normally they should follow those teams and drivers,” he relays. “But on that Friday morning, in front of the Caterham garage, it was full of the cameras shooting me! That was the busiest day for Caterham in the media office – they said afterwards they had so much more work because of all the requests for interviews and photoshoots during this day. It was crazy, but I was really happy.”

Zhou’s appearance this Friday will double the number of Chinese representatives at a grand prix weekend and Ma, who will be an interested spectator from afar owing to travel restrictions, is optimistic the Alpine-backed youngster can shine.

“I remember about 2010/11, when I was a driver coach, I found him [as] a potentially very, very good driver. I believed one day he could do well in his career, so we had a lot of good memories [together] and good times [in Europe], and now he’s jumping in the Formula 1 car, so I’m really happy to see that. I’m looking forward to seeing what he can do in the practice session.”

Zhou’s prospects for 2022 remain unclear, amid Alpine’s decision to retain Esteban Ocon, firmly shutting one door which was albeit always unlikely to open. That may prolong China’s wait for its first Formula 1 racer but Ma is confident that momentum is building.

“We can see more young drivers starting to race in Europe, and in local championships, in go-karts, and also in touring cars and Formula 4 and Formula 3,” he explains. “It’s building up, step by step. I think it just needs more time. As we can see in the past 20 years Chinese motorsport has improved very fast, and is getting stronger – not only in Formula 1, in WTCR, Formula E, there are more Chinese manufacturers, sponsors, taking part in this sport.

“Zhou has good support, and for sure to be a Formula 1 driver you have to be the best of the best, for everything, so it is not easy – for every driver in the world, not just a Chinese driver. So let’s see.”