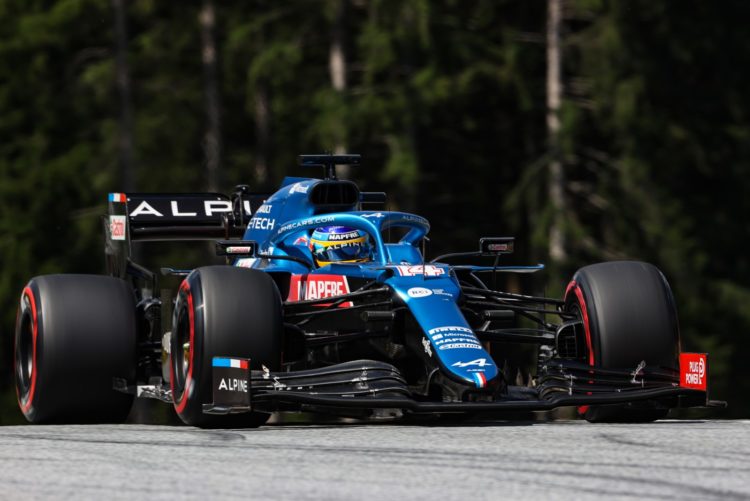 Fernando Alonso says scrapping for the lower points-paying positions will be Alpine’s limit in straightforward Formula 1 races this year.

Alpine has yet to finish in the top five this season, with Alonso’s sixth in the drama-filled Azerbaijan race its best result.

Alonso followed up that effort with eighth in France and went on to finish ninth in Austria on Sunday.

Team-mate Esteban Ocon, meanwhile, was left marooned in 14th spot for the second successive event as Alpine maintained a lowly seventh in the standings.

“Obviously we know our strengths and we know our weaknesses so we try to use them in different places,” said Alonso.

“I don’t think Austria is our best circuit as we saw [in qualifying], and as we see [in the race]. Unfortunately we have two races here so we have to manage the damage that we can have in terms of points.

“I think we did it well in Race 1 as we scored one more [point] than AlphaTauri and two less than Aston Martin so we managed to limit this damage, but yeah, in Race 2 it’s going to be another challenging this weekend.

“We will try to do better, but it is going to be difficult. I think this is our limit. I feel like I was maximising everything being in Q3, maximising [in the race], being in the points. I don’t think there is more. You need some retirements or luck.”

Alonso added that he hopes “extreme conditions” strike the second event in Austria but expressed doubt that Alpine can contend for much higher positions all season.

“I think we were very, very close in terms of performance with Aston Martin,” he said.

“All the other teams [ahead] were faster than us by a long way. We see [Charles] Leclerc having a puncture, or front wing damage, in lap one, and still fishing in front of us, so imagine the superiority they have in terms of performance.

“That will be the trend, I think, for the rest of the year. The cars will not change too much for any team. So [there] will be some circuits better than others for different teams and different car performance.

“I don’t think Austria is one of the best for us but we will try to get better and next weekend we need to test something, we have something in our head to test the performance of the car so it’s a good opportunity to have another race.

“But, yeah, I really hope now that it rains or something next weekend. If not we will be around ninth or 10th, so maybe we need a bit of extreme conditions to be better than that.”