by Nick Turner
A A
0 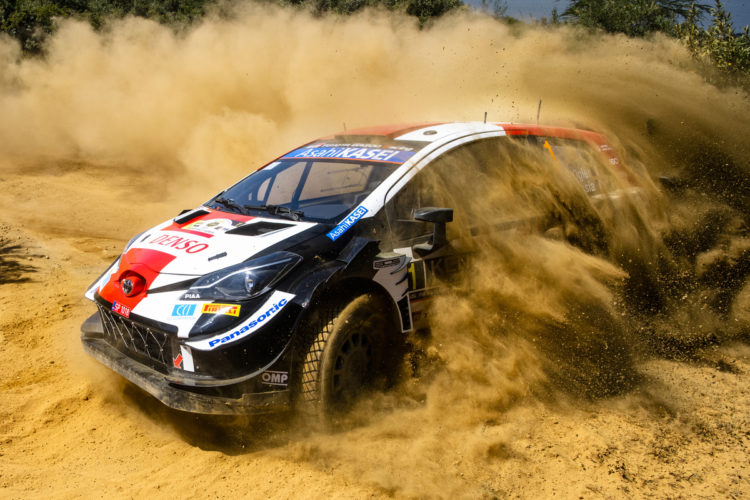 Sebastien Ogier claimed the win on the Safari Rally Kenya in his Toyota Yaris WRC as Hyundai once again lost an i20 WRC with suspension damage from the lead of a rally for the third event in a row.

It was Thierry Neuville who held the lead going into the final day in Kenya, looking to bring some joy back to Hyundai who had lost cars from the lead in both Portugal and Sardinia prior to this event. The Belgium held a lead of nearly a minute going into SS14 but this was slashed to 11.4 seconds as a damaged damper caused the time loss.

It was to get even worse for Neuville as the damage sustained caused the wheel to come away from the car and he would retire from the lead on the road section before SS15. This promoted Takamoto Katsuta into the lead of a WRC rally for the very first time in his career.

Eager to get to the end of the rally and score his first ever WRC podium Katsuta was not driving to the limits in the search of the win and was a sitting duck for Ogier who sensed another improbable win, something which looked unlikely after SS6 as Ogier was nearly two and a half minutes off the lead.

The Frenchman showed his class throughout the event and tied for the lead with Katsuta on SS16 before taking the lead on SS17 and would finish the rally with a 21.8 second lead and two bonus points from the Wolf Power Stage. Katsuta only had the eighth quickest time on the Power Stage as he was more than happy to take his first podium and best ever WRC finish in second.

Third was Ott Tanak as he brought his Hyundai i20 WRC home on the podium for the first time since February. The Estonian wasn’t too pleased as another difficult event meant his third place was inherited by the demise of his team mate rather than outright pace, though five bonus points were Tanak’s for the quickest time on the Power Stage.

Another driver who looked to be recording his best ever WRC finish was Adrien Fourmaux as he took a hugely impressive fourth in his Ford Fiesta WRC in what was a strong and mature drive from the M-Sport drivers. Fourmaux also claimed his first ever WRC stage win on SS16, which enabled him to leap frog his team mate Gus Greensmith into fourth and would stay there until the end of the event. However a post event ten second penalty for corner cutting dropped the Frenchman to fifth and promoted Greensmith to fourth – by 0.1 seconds.

Greensmith was again showing some maturity and brought the car home in one piece as M-Sport scored their best result of the season. The skeleton team sent out by the British team may have been worked hard across the weekend, but they were given their rewards at the end of the event with this result.

In sixth was Kalle Rovenpera who also scored points for the second fastest time on the Power Stage, another difficult event for the Finn as he retired on day one after beaching his Yaris WRC. He returned under Rally2 restart rules and scored important manufacturer points for Toyota.

A trio of local Kenyan drivers then took up the later positions on the leaderboard as Onkar Rai took seventh in his VW Polo GTi R5. Karen Patel was eighth in a Ford Fiesta R5 and another Polo driven by Carl Tundo took ninth.

Elfyn Evans finished tenth overall after retiring on SS3 with suspension damage and the resulting Rally2 restart penalties saw him way down the leaderboard. Third fastest time on the Power Stage gave him three bonus points, but saw his championship hopes damaged as his nearest rival Ogier took home twenty seven points to his four. Lorenzo Bertelli and Dani Sordo were eleventh and twelfth.