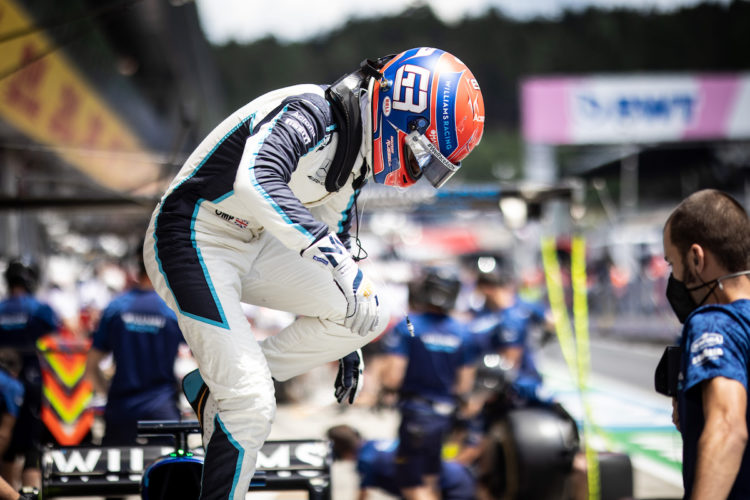 George Russell has set his sights on bagging his first points with Williams after securing 10th place on the grid for the Styrian Grand Prix.

The 23-year-old missed out on progressing through to Q3 by 0.008s, but moved into the top 10 after AlphaTauri’s Yuki Tsunoda was handed a grid penalty.

Russell’s Q2 departure also ensured that he has a free choice of tyre for the start of Sunday’s race.

Russell’s only top 10 finish of his career came at last year’s Sakhir Grand Prix, when he replaced a Covid-19 stricken Lewis Hamilton at Mercedes.

Williams has not scored a championship point since the 2019 German Grand Prix, courtesy of Robert Kubica –  a streak that Russell is looking to end on Sunday.

“Obviously the team did a really good job, the car’s feeling good,” Russell said. “I think we’ve learned a lot about the car recently.

“We’ve been going in a slightly different direction, put in more emphasis for our Sunday. Let’s see how it pans out tomorrow.

“I mean it felt very good in the high fuel yesterday. I’m looking forward to get inside of that top 10 – I’m not looking behind me in my mirrors. I just want to go forward now – let’s see if we can do that.”

Russell added that Williams is operating with a great deal of confidence, having managed to outqualify Ferrari, McLaren and Aston Martin drivers.

“I think all of us we’re feeling confident,” Russel said. “We can go out there and deliver the maximum which is so satisfying even though it’s only P11.

“Knowing that we’ve done the best job possible and we’ve outqualified McLarens, Ferraris, Aston Martins, you know, is massive – and Alpine as well.

“It’s massive for us. So you know really pleased with how everything is going and it is satisfying when it’s like this.”