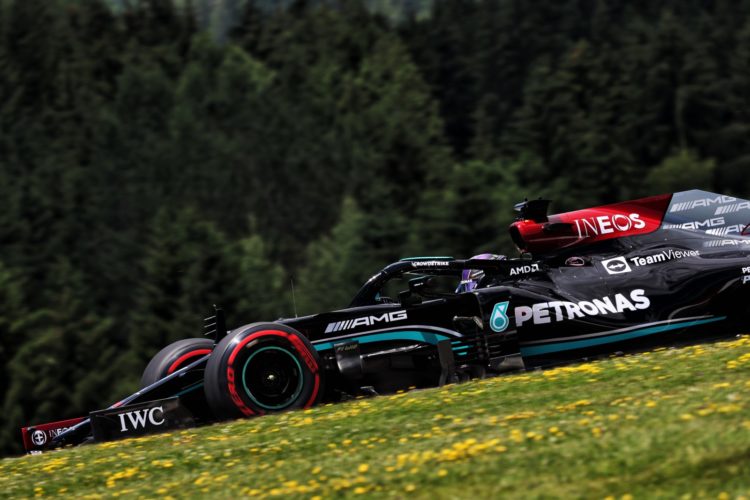 Verstappen had led the way during both of Friday’s practice sessions at the Red Bull Ring, though Hamilton had an ostensibly faster effort erased for track limits.

Verstappen maintained his position atop the timesheets through the first runs on Soft tyres on Saturday, in warm and overcast conditions, before Hamilton surged clear of the field.

Hamilton’s lap of 1:04.369s provisionally left him almost half a second clear of team-mate Valtteri Bottas, though Verstappen responded and closed the gap to his rival.

Verstappen’s first effort drew him to within 0.204s of Hamilton and on his second flying lap he shaved three-thousands off his time, though that effort was deleted for exceeding track limits.

Bottas, who takes a three-place grid penalty into qualifying for his pit lane spin on Friday, wound up third, with Red Bull’s Sergio Perez fourth.

AlphaTauri finished as best of the rest in the one-hour session as Yuki Tsunoda and Pierre Gasly classified fifth and sixth respectively.

Gasly ran with a fresh MGU-K in his Honda-powered AlphaTauri AT02 in the wake of his problems during second practice.

Charles Leclerc was seventh for Ferrari, ahead of Alpine’s Fernando Alonso, while Aston Martin pair Lance Stroll and Sebastian Vettel rounded out the top 10.

McLaren off the pace

McLaren, third in the Constructors’ Championship, had an atypically low-key showing.

Daniel Ricciardo finished towards the foot of the midfield in 17th position while Lando Norris was the sole driver to record his best effort on Medium tyres, placing 19th.

Haas’ Nikita Mazepin was the only driver to run off-track, spinning through Turn 1, in a session that was relatively free of drama or noteworthy incident.

Qualifying for the Styrian Grand Prix is scheduled for 15:00 local time