FIA to clampdown on super quick pitstops from Hungarian GP 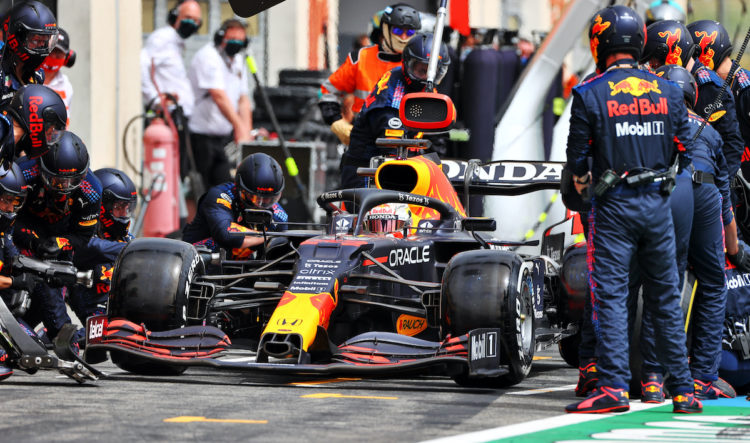 The FIA will implement new rules from the Hungarian Grand Prix in a bid to slow down Formula 1 pitstops, which have hit record breaking speeds.

Teams have been pushing their procedures to the absolute limit in an attempt to shave milliseconds off their pitstop times, in the hope of making up places on track, and one team in particular, Red Bull, has managed sub-two second stops consistently.

The team holds the world record for the fastest ever stop at just 1.82s, completed during the 2019 Brazilian Grand Prix. Whilst they’ve not matched that time since, Red Bull has completed the quickest stop at five of the seven races this season so far, with a best time of 1.93s.

The FIA is taking action on the grounds of safety, by issuing a new technical directive which will come into force for the Hungarian GP.

The new TD will ensure human reaction times are adhered to, ensuring teams simply aren’t relying on their equipment to complete the job without it being checked before the car is given the green light to exit its pit box.

The wording of the TD suggests that the FIA believes some level of automation is taking place and that going forward teams pit stop procedures must have a tolerance built in that allows for human reaction times in signalling.

The changes won’t add a significant amount of time however, but it’ll likely be enough to ensure a sub-two second stop isn’t seen again.

The figures include an additional reaction time of 0.15 seconds from the wheelnuts being observed as tight before the signal is passed to the jack man to drop the car, then a further 0.2 seconds before the car is released.

Teams have been given three races to prepare for the changes, meaning the Austrian rounds and the British GP will be unaffected.

Although the FIA insists it isn’t targeting one single team, Mercedes’ Toto Wolff recently commented on the speed of Red Bull’s stops, which Mercedes have been unable to match.