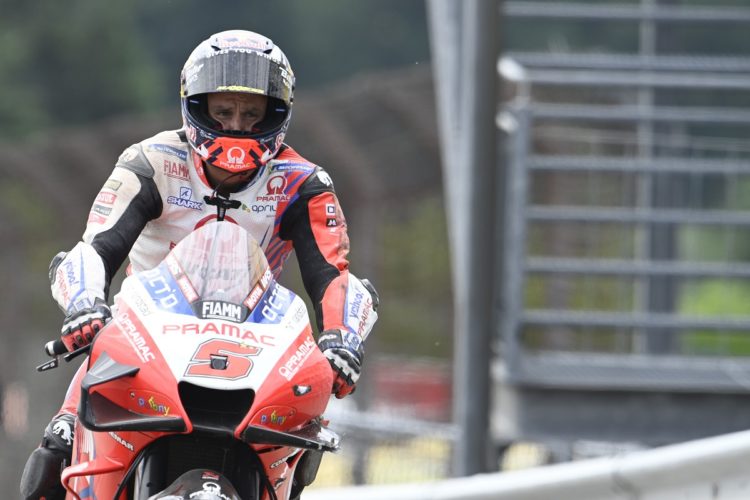 Johann Zarco says he was “nervous” as he fell back in the latter stages of the German Grand Prix, though accepted his eventual eighth place result “isn’t too bad.”

The Pramac pilot scored a surprise pole on Saturday at a Sachsenring venue his Ducati challenger has historically struggled around, though soon dropped back to third early on in the race behind eventual race winner Marc Marquez and Aprilia’s Aleix Espargaro.

While able to sustain the pace throughout the opening segment of the encounter he started to suffer with rear grip across the second half of the contest, slipping to eighth by the flag behind both factory Ducati’s of Jack Miller and Francesco Bagnaia as well as title rival Fabio Quartararo, who ultimately finished third to extend his series lead to 22 over Zarco.

The Frenchman says he was “nervous” as he started get shuffled down the pack because he “couldn’t do much more,” though says he isn’t totally dissatisfied with eighth “considering I was struggling.”

“I wasn’t sure what my feeling (with the bike) would be for the entirety of the race, I think I used the advantage of having pole position because at the beginning of the race I spent a lot of time in third position,” said Zarco.

“I was feeling pretty good and at the key point was to overtake Aleix Espargaro and try to go with Marc (Marquez) because in the first half of the race I had the speed and potential to stay with Marc.

“I felt strong when we had a bit of rain and gained a bit of time there, but I couldn’t overtake Aleix because he did a nice race too.

“I lost a little bit of time there and then for the second half of the race my rear tyre was dropping quite a lot and there were certain areas of the track where I was losing a lot (of time), and the more the tyre wore the worse it got.