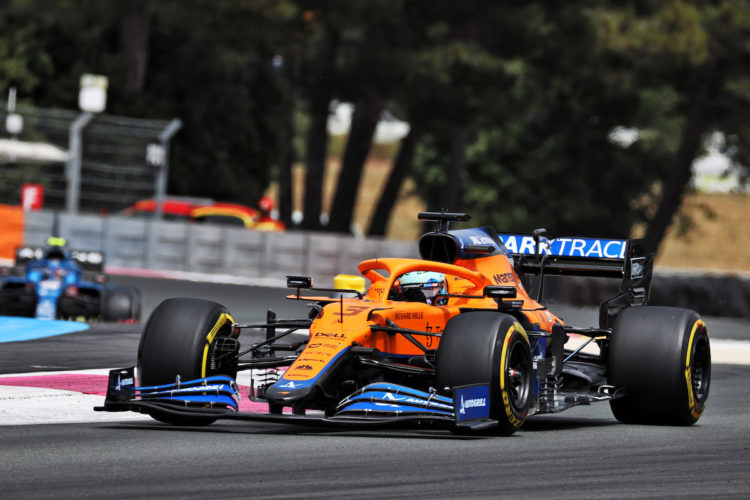 Daniel Ricciardo is eyeing further improvements at McLaren after a strong display at Sunday’s French Grand Prix saw him finish sixth on the road.

Having missed out on the leading midfield positions in qualifying, Ricciardo and team-mate Lando Norris battled past their rivals to head the midfield, with Norris taking the chequered flag in fifth.

Ricciardo states he enjoyed his positive outing in France, having struggled at times to adapt to his new surroundings at McLaren.

“It is what makes me the most happy actually,” Ricciardo said about his on-track battles.

“Well, winning, but after winning, battling and having fun and being aggressive, despite my smile, is certainly my preferred style to get my elbows out and have some fun, and talk a bit of smack on the radio, so it was good and I enjoyed it.

“At the end I was playing a bit of defence so unfortunately was not able to attack for the whole race. But I thoroughly enjoyed the first stint.”

With Ferrari failing to score points in the race, McLaren took control of the fight for third in the Constructors’ Championship and now heads the Scuderia outfit by 16 points.

Ricciardo’s result at the Circuit Paul Ricard matches his best for the season, as he believes he is continuing to make gains behind the wheel of the MCL35M.

“It is definitely another step in the right direction,” Ricciardo said. “I still would not score myself a 10 out of 10 yet, but I’m getting there.

“I’m certainly a lot more comfortable with the car, despite not being that happy with the car in the race, it was actually quite challenging but visibly the cars around us were struggling more.

“Maybe that was just the style of this race and the circumstances of today. So I will keep learning, and I’m happy for the team, it was a good day for us.”