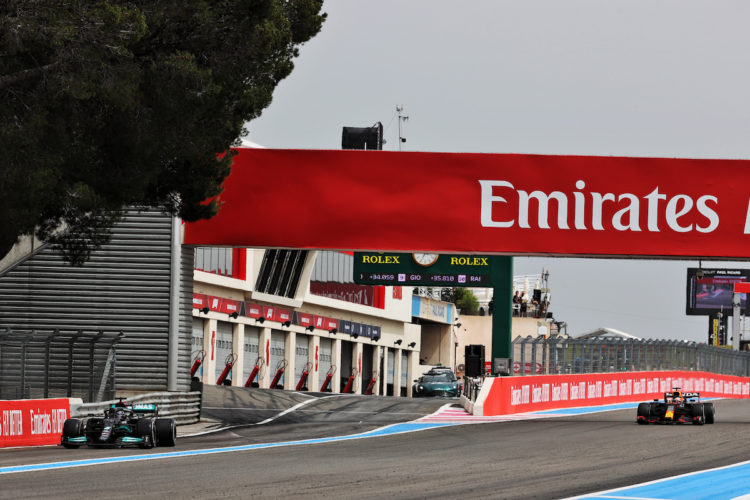 Max Verstappen has admitted that Red Bull was not anticipating that it would overtake Lewis Hamilton by undercutting him during the French Grand Prix.

After making a mistake at the first corner on the opening lap, Verstappen fell behind Hamilton and shadowed him for the opening portion of the race.

Verstappen pitted while trailing Hamilton by just under three seconds, but managed to move ahead when the seven-time world champion pitted on the following lap.

Although he made a second pit stop in the race compared to Hamilton’s single service, Verstappen went on to secure his third race win of the year, completing the race-winning overtake on the penultimate lap.

Getting ahead of Hamilton in the first pit stop proved crucial for Red Bull’s strategy – however Verstappen says it was not the intended outcome of his stop.

“My out-lap was good, but I didn’t expect the undercut to be so big,” Verstappen admitted. “When I went out, suddenly I had so much more grip on the tyres everywhere.

“I don’t know how fast how Lewis’ stop was or whatever, I need to look at it again. But I think nobody, even us, expected to undercut Lewis.

“So it clearly shows that with new tyres, the tricky conditions out there… when you are on new tyres it’s easier to lose the car a little bit or whatever because of the wind.

“When you have new tyres, you have one lap where it feels a lot better. As soon as I was ahead, the next few laps, they didn’t feel great anymore.”

Verstappen now holds a 12-point lead over Hamilton in the Drivers’ Championship ahead of the upcoming Austrian double-header, with Sunday’s win giving him confidence that Red Bull can continue its strong form.

“Of course, it’s very promising,” Verstappen said. “The race, the conditions, how they were in the beginning were not easy for us.

“But then again towards the end, the car started to come together again and we were very competitive. Of course very pleased with that and I hope that we can keep this up.”