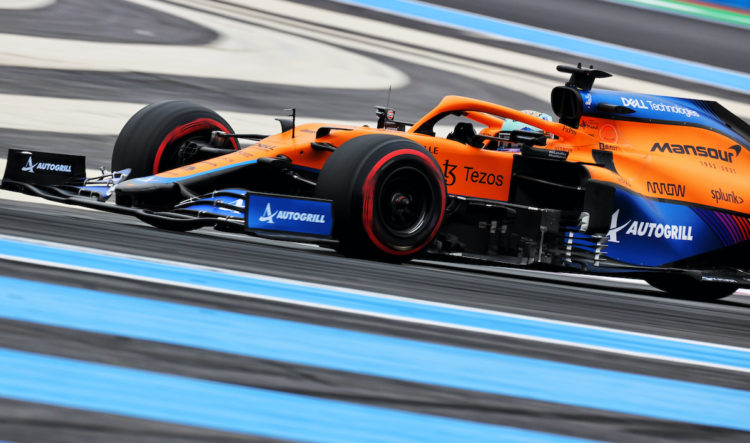 McLaren not only showed up at Le Castellet with a commemorative livery for the late Mansour Ojjeh, but also introduced an important new update package as it finds itself locked in a close battle for third in the championship against Ferrari.

The MCL35M suffered in Baku, and failed to express the potential from the first races. Ferrari grabbed third place in the Constructors’ Standings, taking advantage of two SF21-friendly circuits in Monaco and Baku.

At Paul Ricard McLaren returns to a track that should favour the characteristics of the papaya-coloured car. Compared to Baku and Monaco, the Le Castellet track requires aerodynamic grip rather than mechanical. The curves of the French circuit are all wide-ranging, and almost all medium-high speed. Furthermore, the long straight of the Mistral should highlight the efficiency qualities shown so far by the MCL35M.

However, McLaren knows that if they want to fight with Ferrari they cannot slow down in the development race, and indeed important updates and track specific adaptations have arrived here in France.

The first aerodynamic changes were seen on the rear wing, where a new endplate was introduced, modified at the bottom.

The new bulkhead no longer has the vertical fringes in the lower area, which are used to manage the turbulence caused by the rolling of the rear tyre. In the new specification, horizontal blows have been implemented, useful for directing the air trail in the rearmost part.

McLaren does not seem to fear the heat – although rain is expected for Sunday. In the free practice sessions a new engine cover was used, more closed off in the back than the one seen in Baku. The Mercedes Power Unit allows you to use more aggressive choices, without running into overheating problems. On Friday night, Andreas Seidl’s team also broke the curfew to replace a faulty sensor in the gearbox area on Daniel Ricciardo’s car.

At the rear, the British team have worked hard to find the best aerodynamic configuration, with a more loaded rear wing than in Baku, and with comparative tests in the use of the T-wing.

As for the new rear wing flexion tests, which were introduced this weekend as a result of the flexi-wing saga, McLaren does not seem to have suffered from this. The Woking car is among those that did not use a flexible wing, even if the FIA continue to monitor movements and pushups. On the wings, in fact, the stickers introduced in Baku are still present, placed on the mobile flap and on the main plane, which allow the FIA ​​to have a reference point to accurately measure flexion.

The new package introduced this weekend also includes changes to the front area of ​​the car, where they are trying to find better air flow management. McLaren is one of the few cars not to use the S-Duct system, which shifts some of the flow from the bottom of the chassis to the top.

Right in the front area of ​​the chassis, two Mercedes-style fins have been added, which help to keep the air flow adhering to the rest of the car.

The changes to the front of ​​the MCL35M began in Spain and have steadily been adapted and perfected, while the rear of Norris’ and Ricciardo’s car performs well in fast corners, also thanks to its longer wheelbase.

The technical challenge of Paul Ricard also involved the issue of “tyre pressures”, after the accidents of Lance Stroll and Max Verstappen in Baku. Changes in temperature and pressure checks by the FIA ​​and Pirelli employees have been implemented.

McLaren’s Friday was not brilliant, however, and Saturday was only slightly better with Norris P8 behind both Ferraris and Ricciardo 10th, behind the Alpine of Fernando Alonso. The gaps are however very close and on Sunday tyre management will be important, even if the rain arrives.