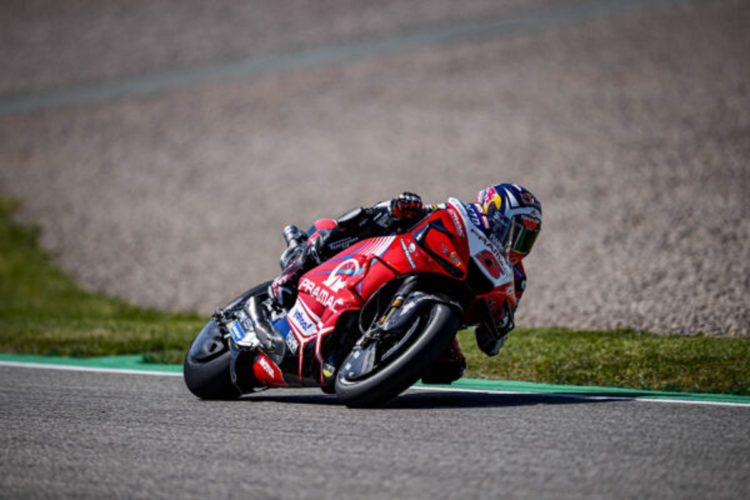 Johann Zarco flew to his first pole position of 2021 for the German Grand Prix at the Sachsenring, shattering Marc Marquez’s near-decade pole streak at the venue.

The Pramac rider didn’t look to be in the conversation for pole throughout the early stages of Q2, the Frenchman able to manage only the ninth best effort following the opening runs in the pole shootout while ’21 pole-king Fabio Quartararo looked to be in formidable form once again as he led Marc.

Quartararo extended his leading advantage over the Honda racer by posting the fastest lap of the weekend-a 1:20.247s tour-though his chances of a sixth-straight MotoGP pole were dashed just moments later as Zarco flashed across the line to beat the Yamaha’s benchmark by just 0.011s.

Zarco then crashed on his cool down lap as he seemingly was distracted by Quartararo slowing down ahead, forcing yellow flags to be shown in the vicinity-meaning no rider could improve their time.

Jack Miller was the only rider that could hold a candle to Zarco’s speed towards the end, though the Aussie’s hopes of his own first pole of the year were wrecked as Takaaki Nakagami crashed-bringing out the yellows once again and rendering Miller’s lap void.

All this left Zarco on pole by the same slender margin over Quartararo, while Aleix Espargaro starred once again for Aprilia as he completed the front row thanks to a handy slipstream from brother Pol Espargaro.

Miller ended up fourth thanks to his earlier effort ahead of Marc, the Spaniard unable to keep up his premier class pole streak at the Sachsenring that dates all the way back to ’13-his debut year in the series-after finding himself unable to improve late on due to the yellows, leaving him fifth.

Miguel Oliveira will start sixth for KTM ahead of impressive rookie Jorge Martin, while Pol ended up eighth despite having to contest Q1.

The Honda man was full of commitment in the opening segment of qualifying as he looked to try and book one of the final two places in the pole shootout, at one point heading the timesheets before Suzuki’s Alex Rins denied him with a last gasp gambit.

A crash for Petronas SRT’s Franco Morbidelli as he tried to rescue his so-far sub-par weekend ended any hopes of improvements in the closing seconds for his rivals, leaving Rins and Pol to grab both spots ahead of several other big-name casualties.

Brad Binder was the fastest of those who missed out on Q2 in 13th ahead of Luca Marini, while Valentino Rossi was only 16th ahead of reigning MotoGP champion Joan Mir, with Morbidelli ending up 18th.

Maverick Vinales was the worst affected by Morbidelli’s accident as he was forced to abort his final lap, leaving him a disastrous 21st on the grid ahead of only Lorenzo Savadori’s Aprilia.

Nakagami meanwhile ended up ninth despite his crash towards the end of Q2 ahead of the struggling Francesco Bagnaia, with Rins and LCR’s Alex Marquez completing the 12 riders that contested the pole shootout.