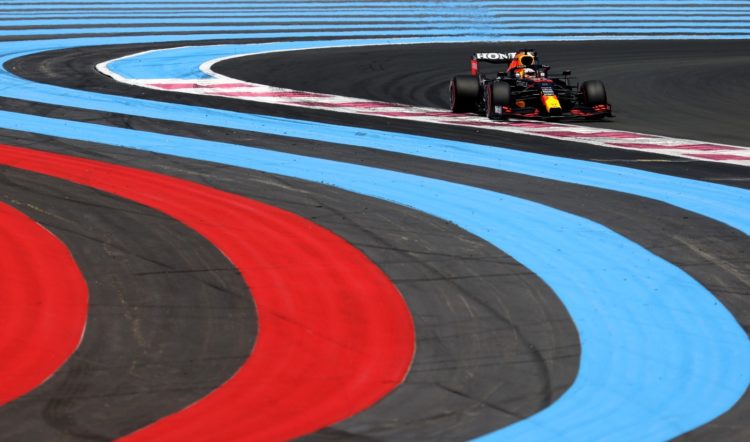 The Red Bull driver’s primary title rival Lewis Hamilton could muster only third place, 0.253s down, with the Briton radioing his Mercedes team to suggest “something’s not right with this car.”

Hamilton previously claimed successive pole positions and victories upon Formula 1’s only visits to Paul Ricard in the current era, in 2018 and 2019 respectively.

Both Hamilton and pacesetter Verstappen had minor moments during their race runs on Medium tyres, with Hamilton drifting wide through Turn 14, while a snap of oversteer pushed Verstappen through the run-off at La Beausset.

Verstappen also ran heavily across the yellow kerbs at the exit of Turn 2, causing some parts to shed from the RB16B, prompting an exchange between Red Bull Sporting Director Jonathan Wheatley and F1 Race Director Michael Masi.

Masi, who had a similar conversation with Mercedes Sporting Director Ron Meadows earlier on Friday, pointed out that the kerbs were also present in 2019, when Formula 1 last visited Paul Ricard.

Alpine holds only seventh in the Constructors’ Championship, having lost ground in the battle for fifth to Aston Martin and AlphaTauri, after its opponents both scored podium finishes in Azerbaijan.

But the early running on home soil in Provence points towards a potentially prosperous weekend for the team.

Fernando Alonso was an encouraging fourth in the A521, within half a second of leader Verstappen, while Esteban Ocon – newly re-signed through the 2024 season – finished in sixth position.

Such was Alonso’s pace that he managed to set the overall best time through the middle sector of the lap.

It concluded a strong day for Alpine after Ocon and Alonso classified fifth and seventh respectively in first practice.

Ferrari’s Charles Leclerc scored successive pole positions in Monaco and Azerbaijan but the pace of the SF21 in France suggests a hat-trick is an unlikely proposition.

Leclerc finished in fifth spot though faced a deficit of almost seven-tenths of a second to pacesetter Verstappen.

McLaren had a relatively subdued day with Lando Norris scraping into the top 10, just 0.009s up on Alfa Romeo’s Antonio Giovinazzi, while Daniel Ricciardo classified 14th.

Perez off the pace

Sergio Perez claimed his first victory in Red Bull colours at the previous round in Azerbaijan but cut a low-key figure through Friday’s running.

Perez finished the second practice session only 12th, over a second behind Verstappen, leaving his side of the garage with work to do ahead of qualifying.

Yuki Tsunoda was 13th, in front of the aforementioned Ricciardo, while it was line astern thereafter.

Aston Martin duo Sebastian Vettel and Lance Stroll clung to the rear of the midfield, though Williams and Haas faced a relative chasm, with George Russell six-tenths behind the Canadian driver.

Nicholas Latifi, and the Haas pair of Mick Schumacher and Nikita Mazepin, completed the field.