Bottas able to “trust the car” after French GP practice 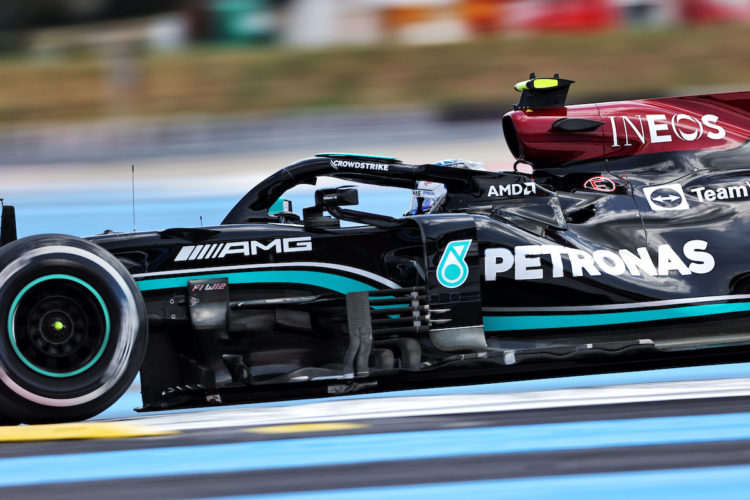 Mercedes’ Valtteri Bottas says he has regained trust in the W12 car following the opening day of practice at the Circuit Paul Ricard.

Bottas enters the French Grand Prix weekend on the back of two consecutive non-point scoring finishes, having failed to finish in Monaco before struggling to 12th place in Baku two weeks ago.

The Finn ended the morning practice session in France on top of the timesheets, before finishing the afternoon outing in second place, 0.008s behind Red Bull’s Max Verstappen.

In a pre-scheduled decision, he and team-mate Lewis Hamilton swapped chassis for this weekend – however Bottas is not convinced that the change has sparked his strong pace to commence the French event.

“It’s hard to say if it’s the chassis or the track conditions, but there’s a lot better feeling than two weeks ago, that’s for sure,” Bottas said.

“I felt we started the weekend on the right foot. Everything was feeling OK, being comfortable and pretty fast with the car so far.

“It’s such a different track [to Baku], but the balance is good, the tyres are working well, I’m confident with the car, I can trust the car, I think that’s the biggest difference.”

Bottas is yet to win a grand prix this season, with Hamilton taking three in the first six races, while the Red Bull duo of Verstappen and Sergio Perez have two and one respectively.

Although Mercedes is expecting this weekend’s track layout to play to the W12’s strengths compared to the street circuits of Monaco and Baku, Bottas believes it will be fighting with Red Bull throughout each session.

“I think it’s fairly close. We expected them to be strong but for now it feels like it’s between us and Red Bull, but it’s a very different track from Baku or Monaco, so we’ll see tomorrow.