Insight: From wreckage to race-ready backup in 133 minutes 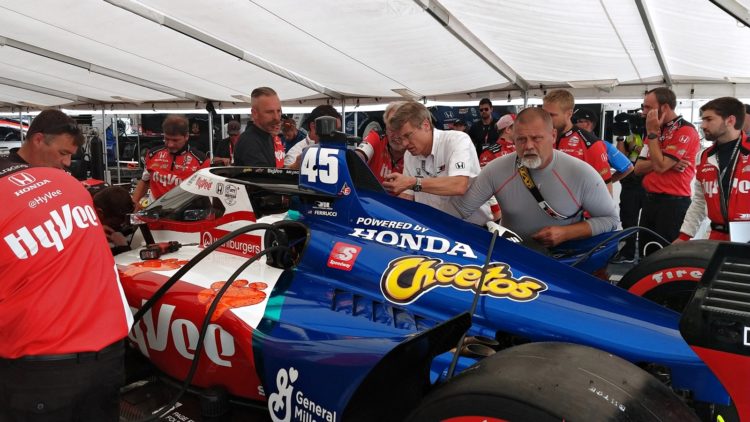 A full field of 25 drivers took the green flag for the second race of IndyCar’s Detroit Grand Prix double header on Sunday, but it was perilously close to being only 24.

During the final seconds of qualifying that morning, Santino Ferrucci lost control and smashed his Rahal Letterman Lanigan Racing Honda hard into the concrete barriers.  From that moment, time was ticking to get a car ready in time for the green flag.

MotorsportWeek.com was there behind the scenes and dissects the herculean effort made by the entire RLLR crew to allow Ferrucci to start the race.

On the final lap of the Sunday morning qualifying session, Ferrucci loses control of his HyVee branded car in the final corner of the bumpy street course, smashing into the concrete wall. The impact destroys the front suspension, damages the rear wheel, and results in a penalty that costs the 23-year-old his lap times. He officially qualifies 12th, but it is not known if the car can be fixed in time.

The car arrives back at the team’s garage area approximately 15 minutes after the crash. Work begins immediately to determine if the car can be repaired. Using experience from Takuma Sato’s crash in qualifying at Texas Motor Speedway last year, the team determines within 10 minutes that the left-hand crash structure would need to be replaced. At that moment, the decision to switch to a backup car is made, and the scramble begins.

Sato’s backup car is removed from the team’s hauler and the crew immediately pours over every inch to begin preparations.  The reason Sato’s car is chosen is that his car most closely matches Ferrucci’s baseline setup. RLLR was racing three cars in Detroit, and only has five race-ready cars in their stable, leaving part-time driver Ferrucci to be assigned one of the full-time driver’s dedicated backups.

The entire engine from Ferrucci’s primary car is removed so that it can be installed on the backup chassis. Other pieces are removed as well so they can be transferred, including the Aeroscreen assembly and the mirrors.

Ferrucci’s original engine is bolted on and attached to the rear end assembly. By this time, crew members from all three RLLR teams are working on all sides – including underneath – of the car to hook up all the necessary hoses, cables, and bolts. Honda engineers finish their evaluation of the engine and determine that it should be in race-ready condition.

The crew begins to tire after having been frantically working in the warm and humid conditions. Deep in their element, however, morale is not low.  A joking call of “You get a new car, and you get a new car!” is heard from one mechanic as he adjusts the front suspension.

A new left side exhaust assembly is installed to replace the damaged one from Ferrucci’s primary car. The floor is installed on the right side of the car, and coordination continues between over a dozen skilled crew members. Work continues to attach all the linkages from the cockpit to the 700 horsepower Honda engine.

Ferrucci watches on as Sato’s backup car is transformed into his new ride. Discussions take place to go over a revised pre-race gameplan.  Additional components from Ferrucci’s primary car are installed to get as close to his preferred setup as possible.

Side mirrors and the underside skid plates are installed. The custom molded driver seat is installed, as well as other cockpit padding that is necessary to accommodate a different driver. Sato and Ferrucci are similar in height, but differences in body shape and driving position must be accounted for.

Fuel is added for the first time and, after some initial trouble, the engine is fired. Honda engineers look through the data streaming from the car and see that everything seems normal. Multiple IndyCar series officials are on-hand to make sure that all the hard work is being done in accordance with the rules. They also answer detailed questions about protocols in real-time, helping to ensure the crew can keep working at full speed.

Ferrucci walks over discuss the procedure with the IndyCar officials. Morale among the crew seems higher as the engine is switched on a few more times to confirm the multitude of systems. Replacement HyVee vinyl decals are placed on the sidepods, although many of the colors of Sato’s livery will remain as they are.

The race-ready driver notices a crewmember struggling to fit a body panel, and jumps in to assist. Ferrucci is fully aware of how slim their margins remain, and works to ensure not a single minute is wasted. Crew members for Sato and Graham Rahal leave to help prepare their own cars, leaving the No. 45 crew on its own to finish the last of the tasks.

It is noted that the replacement exhaust tip is slightly askew and is touching the newly installed side panel. After discussions with among a few of the crew, it is determined that it will not pose a problem and work can continue in other areas.

Tires are fitted and the car is prepared to be lowered off the jack stands. Work continues on the front suspension, but the rear half of the car only needs to have the engine cover installed to cover all the sensitive components.

As the car is lowered from the jacks, a Honda technician notices a stream of fluid from underneath the car. An initial determination that the fluid is a water leak proves to be incorrect. It’s fuel.

Stress levels jump a couple notches as a different Honda engineer quickly isolates the problem to the right side. Fuel is drained from the car and the source of the leak is spotted. After requesting tools and a replacement part, the engineer is able to make the necessary swap in just a few minutes. Repressurization of the fuel system seems to confirm that the crisis was averted.

The crowds of fans that had gathered to watch the coordinated chaos are parted and the car is wheeled out of the tent. Discussions are heard among the crew about setup adjustments that were not completed, but the consensus is that getting the car to the grid in time must take priority.  The car is wheeled to the pit lane, which is over one-third of a mile away.

The car arrives in position to the applause of rival teams who can fully appreciate what the squad has achieved. Ferrucci finally gets a chance to climb in the car to make sure everything feels correct, mere minutes before the command to start engines is called out at 12:44 PM.

Amazingly, there are no troubles noted with the car. Ferrucci drives away for the formation laps and is able to immediately start making passes in his new car once the green flag flies. Even with an incomplete setup applied to the car, Ferrucci is able to muscle his way around the 2.35-mile temporary course as well as anybody. He even went on to claim a top 10 finish with the only indication that he was diving a backup car being the piecemeal bodywork colors that adorned the No. 45 car.

The incredible achievement of the entire Rahal Letterman Lanigan Racing team is easy to overlook, but their fast and decisive actions were the only thing that allowed them to make the race. The time from when the team decided to go to the backup car until said car rolled out of the garage area ready to race was only 2 hours 13 minutes.

Ricardo Nault, RLLR Team Manager, acknowledged that all three teams work together often, but have never been pushed this way before. He also pointed out that the Honda engineers were critical in inspecting and readying the engine for the race. Without everyone’s help, he reckons there is no way they would have made it to the grid in time. As it was, they only had a couple minutes to spare.

Thank you to Ricardo Nault and the rest of the RLLR team for providing the additional insight needed to make this feature possible.